A non-perishable food sculpture depicting the minion characters from popular film Despicable Me and paying homage to the Olympics was named as the People's Choice award winner for the seventh annual CANstruction event hosted by the Food Bank of Waterloo Region at Conestoga Mall.
Thirty students and two faculty members from Conestoga's Architecture Construction Engineering Technology program erected the ACET Olympic Minions sculpture after months of planning and collecting donations from program and community partners to purchase the 2500 food items needed for the building materials.

The structure, which consists of a variety of canned juice and vegetables, snack foods and other non-perishable food items, took about six hours to construct. 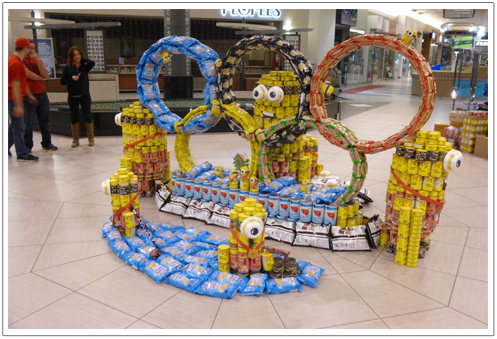 The annual CANstruction event brings together teams of engineers, designers, architects and students who compete to design and build intricate structures from non-perishable food items. The completed structures were on display at Conestoga Mall in Waterloo from March 9 - 16.

When the competition is completed, all food items used in the sculptures are donated to the Food Bank of Waterloo Region. The organization hopes to collect 24,000 pounds of food through CANstruction - or enough to handle its needs for one week.

Visit CTV news for some video highlights of this year’s entries.