Waterloo Innovation Park played host to 14 of Conestoga's interior design students as they faced off in a layout and design charrette on January 31.
Set in an industrial-style office space, the event featured seven pairs of students competing to craft the most feasible, flexible and accessible shared space in about six hours.

Students began their day at 9:00 a.m. with a tour of the space, keeping the focus on local businesses, economic growth and the technology sector as the target tenant. The client, in conjunction with realtor MJ Lawson, provided the vision for the space, explaining the mandatory elements of each creation.

Bachelor of Interior Design program coordinator Wendi Hulme explained that faculty meticulously paired each of the seven second-year participants with one of the third-year participants to balance skillset, work style and speed to enhance the results. “Right now (the space) is ready to be leased,” said Hulme. “There could be one really huge tenant or up to twelve in the space. It’s an existing building that has been renovated and the interior design students were designing a space within that same building that would be used by all tenants.”

Hulme explained that during the tour, the client “left (his direction) kind of vague, hoping the students would ask questions - and they did. They asked about how it will be used, if users needed flexibility, accessibility - all those types of things. They were taking notes and then had to go back and start to design in their teams based on those parameters. They had to incorporate technology in the design and use local materials to create a space that was innovative, creative, flexible and feasible,” Hulme said, adding that the interaction with clients in a real-world environment is a refreshing break and good test of students’ working knowledge. 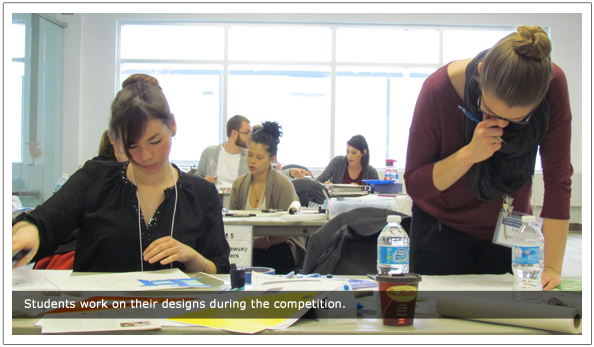 Part way through the day, students’ plans were meddled with - as they would be in the real world. Measurement mistakes or new demands from the client to incorporate certain fabrics or materials were just a few of the wrenches thrown into the planning. Just after lunch, students were told there was a miscalculated measurement, so they were allowed back into the site to find the measurement and alter their plans accordingly.

“(The mistakes) took them away from their design and the momentum of their concepts … there were about ten reclaimed items donated by a local business, where lumber or timber wood pieces had come from a fire, or posts had to be used…. Students were given time to select pieces that had to be incorporated into the design. They all incorporated that and went back to designing. But it was pens down at 4:00 p.m.,” Hulme said.

Students were then given approximately 30 minutes to prepare presentations about their project. Each presentation would take about two minutes in front of the judges. “At 5:00 p.m., the judges deliberated and decided on three designs … they pulled the top three up and they each had 45 seconds to defend their concept and reasoning. Then after that, one team was selected,” Hulme said. The winning team, Sydney Murawsky and Amy Meyers, won the grand prize of $3,500.

Second and third place winners were Amy Schell, Joel Burkard, Valerie Cochrane and Bronwyn Greavette, who received prizes such as wine and gift cards from sponsors.

For the students and faculty involved, this was more than a competition - it was all about the opportunity to apply their classroom knowledge, network with business people and take direction from an actual client.

“They had to make professional and educated decisions based on what they were hearing from a potential client - so that was a really big deal. The other thing is to actually be in the space they were designing rather than the classroom was really helpful ... In design, you do have a lot of time constraints, and deadlines are huge deal. But if you miss it by even a minute, sometimes you miss that opportunity,” Hulme said, adding that typically you have longer than 6 hours for a concept, but the added time constraint heightened the competition and sharpened students’ skills to work under pressure circumstances.

Judges commented that all the teams met the client’s expectations for innovative and flexible design. Hulme explained that they were all genuinely happy with the experience and taken aback by how much they could accomplish in that short amount of time.

“The students were all relieved to be done and at the same time proud of their work. Everyone came out with a valuable experience and all of them were very grateful to be given this opportunity.”

The Bachelor of Interior Design is a four-year degree program focused on architecture and interior design that provides professional training in design development and the presentation of interior spaces. Spaces are still available for Fall 2014 entry.