Student designs to be featured in real-world marketing campaigns

Conestoga’s second-year graphic design illustrations class welcomed three special guests on November 26, when representatives from Kitchener-Wilmot Hydro and Kitchener Utilities were on-hand to announce the winners of a competition to design a character that would increase the visibility of the community’s utility services and showcase the strategic collaboration of the companies.
According to Professor Andrew Kolb, student designs had to meet strict specifications provided by the client group: the character needed to be adaptable enough to represent all the utilities, be clearly recognizable and appeal to a wide target audience. The clients also wanted an avatar to connect with the children, who are often the champions of greener living within their households. 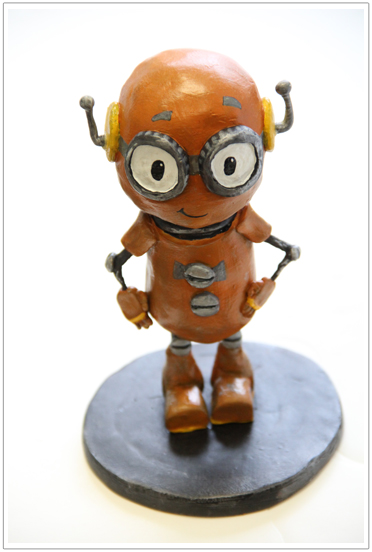 Copper the Robot, created by second-year Graphic Design students Amy Lippert and Rachel Mackenzie, was chosen as the top design by company representatives, netting its creators $1000 each in recognition of their hard work.

Copper is a small brown robot with large glasses, big antennae on his ears, and nuts and bolts all over his body. For Lippert and Mackenzie, the intention was to create a design that would attract children, but reflect the sophistication of the campaign to promote renewable resources and sustainability. They found the greatest challenge was narrowing down their range of ideas to develop the winning concept.

The student creation will be integrated into upcoming print and digital campaigns for Natural Comforts, a joint communications initiative from the City of Kitchener, Kitchener Utilities and Kitchener-Wilmot Hydro to provide information to customers and increase the visibility of utility services in the community.

Christine Matu, marketing advisor for CDM programs at Kitchener-Wilmot Hydro, described working with the students as a learning experience for the client group as well: “We really did not know what to expect in the beginning,” Matu said. “Six weeks is pretty incredible to go from a sketch on paper to something that’s finalized, but the concepts that we’ve chosen are ready to implement with very little revision. We were absolutely floored by the calibre of the design.”

Matu and her colleagues were so impressed by the level of the students’ work that they decided to add a second prize as well. Graham Hartnell and Kristie Ritzmann received $500 each for Little Plug, a design that mimics an electrical plug with human traits, such as a smile and eyes. Hartnell and Ritzmann’s creation will be used for conservation and corporate messaging, such as ‘save on energy’ campaigns.

Conestoga’s Graphic Design program is a full-time, three-year advanced diploma program that covers topics related to the traditional and contemporary practices in graphic design, including design theory and history, contemporary culture and design, green strategies and sustainability, interactivity and accessibility. The program is recognized by the Registered Association of Graphic Design of Ontario (RGD).