A reception to honour the career and community achievements of some of Conestoga’s most accomplished alumni was held Wednesday, November 6 at the Waterloo Region Museum at Doon Heritage Crossroads. The Alumni of Distinction Award, established in 1997, is Conestoga’s highest recognition of outstanding graduates.
The 15 recipients of this year’s Alumni of Distinction awards come from a variety of backgrounds and have achieved success in a wide range of fields. What they all have in common is the unwavering commitment to excellence that has helped them reach their individual goals, made their workplaces more effective and their communities better places to live.

Another highlight of the evening was the recognition of the Alumni Association School Awards, presented to 14 students who are entering their final academic year at Conestoga, and have demonstrated high academic achievement, community involvement and leadership skills. 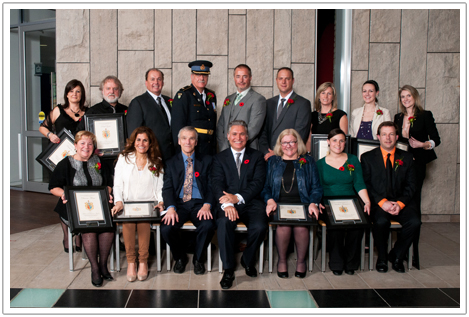 Tahani Aburaneh - Business Administration - Management Studies (1987)
A successful entrepreneur, Tahani Aburaneh is one of Canada’s leading experts on real estate investment and the author of Real Estate Riches: A money-making game plan for the Canadian investor. She is also the founder of the Real Estate Riches Academy and a featured speaker at conferences and events across North America.

Mark Andrews - Criminology and Law Enforcement (1983)
A 30-year veteran of the Ontario Provincial Police, Mark Andrews currently serves as Inspector, Commander Traffic and Marine for the North East Region, stationed in North Bay, Ontario. He oversees traffic safety on highways, trails and waterways that cover a geographical area of more than 490,000 square kilometres and has worked tirelessly with media and local community groups to promote safety initiatives.

Paul Boshart - Primary Care (1993) and Advanced Care Paramedic (2002)
Paul Boshart is an advanced care paramedic with Guelph Wellington EMS and teaches Ambulance Operations at Conestoga College. He is an active and passionate volunteer in area schools and across the local community, and has rallied support for such causes as the fight against domestic violence.

Daniel Clayton - Construction Engineering Technology (1984)
Daniel Clayton is president/owner of Polyurethane Foam Systems Inc, Canada’s leading spray foam chemical supplier. He is a pioneer in this growing industry, and has personally trained and certified almost 600 sprayers. He is an active and committed volunteer in the community.

Corey DeBruyn - Electrician Construction & Maintenance Apprenticeship (1999)
Corey DeBruyn is owner of The Electricians, a full-service electrical firm that services major government, industrial, commercial and retail contracts. He was named Entrepreneur of the Year by Brantford’s Chamber of Commerce in 2011 and serves on the Conestoga’s Program Advisory Committee for electrical programs.

Jennifer Green - Industrial Maintenance Mechanic - Millwright (2008)
Jennifer Green is a tireless advocate for the promotion of women in non-traditional careers and serves a role model and mentor for women in the skilled trades. Her numerous honours and awards include the YMCA-YWCA of Guelph Women of Distinction Award (Trades) in 2013.

Jane Hamilton Wilson - Nursing Diploma (1975)
Jane Hamilton Wilson has devoted her career to mental health nursing, working as a practitioner, educator, leader and political advocate. She holds a PhD from the University of Alberta and is a full-time professor in the Collaborative BScN program. She was recently named to the Advisory Council of the Mental Health Commission of Canada.

Kimberly Iezzi - Social Services (1995)
Kimberly Iezzi holds a Masters of Social Work degree from WLU and works with Family and Children’s Services, Women in Crisis and Waterloo Regional Homes for Mental Health, Kim is a tireless volunteer, lending her expertise to support social justice and community causes across the community.

Heather Jamison - Bachelor of Science in Nursing (2007)
Heather Jamison began her career as a public health nurse at the Grey Bruce Health Unit in Owen Sound, then two years as an outpost nurse in the remote northern Ontario community of Kashechewan. She is currently pursuing further education while working as a clinical instructor at Conestoga.

Dianne Moser - Recreation Leadership (1977)
Diane Moser is president of TireSupplier Distribution, Inc. (TDI), one of Ontario’s leading tire distributors. She was instrumental in the development of the Betty Thompson Youth Centre for at-risk youth, and has held numerous leadership and volunteer positions in health care, education and non-profit sectors for the benefit of our community.

Keith Murphy - Broadcasting - Radio and Television (1980)
Keith is owner of Backstraight Productions and has worked as a camera operator in Hollywood films and acclaimed television series since 1988. He has worked on more than 60 film and television productions, and has had the opportunity to work with such leading Hollywood stars as Peter O’Toole, Ted Danson, Julie Andrews, Clive Owen, Martin Short and Jennifer Lawrence.

Paul Szewc - Manufacturing Wood Technologies (1984)
Paul Szewc is owner of Masterpieces - Wonkies & Art Gallery in Guelph, where he creates custom, one-of-a-kind furniture and art pieces. His work has been featured in many newspaper and magazine articles. He is an avid supporter of the local community, providing workshops for the public and donating some of his creations to local charities and businesses.

Cristen Quigley - Event Management (2009)
Cristen Quigley currently serves as the Annual Fund manager for the Grand River Hospital Foundation. Her passion for health and commitment to the community led to the creation of Kin Canada’s National Day of KINdness as well as The Glass Slipper Affair, an initiative that has raised more than $126,000 to support the Family and Children’s Services Foundation.

Scott Totzke - Computer Programmer Analyst (1986)
Scott Totzke is a senior vice-president of security for BlackBerry. He has helped direct the evolution of mobile security within the company and across the industry. He now consults with large enterprises and government agencies around the world on such issues as national and international cyber security strategies.

For more information, and full profiles of Conestoga’s 2013 Alumni of Distinction, visit http://www.conestogac.on.ca/alumni/awards/aod2013.jsp