In high school, Jeremy Legg never imagined that he would be pursuing his MBA at the elite DeGroote School of Business at McMaster University in Hamilton. For Legg, focusing on academics wasn't quite as exciting as other pursuits in high school and he never saw university as an option in his future.
A 2012 graduate of the International Business Management (IBM) co-op program at Conestoga, Legg said that as a result of his late focus on academics in high school, he opted for a program with a strong applied component.

"I did not anticipate university being a very successful experience for me," said Legg. "The final decision to attend Conestoga over others was heavily swayed by the co-op option and the 'international' aspect of the program."

Legg soon realized how important academics and high marks were and he excelled in the IBM program. He credited the program’s numerous co-op terms for helping him gain practical knowledge and valuable business experience.

"Co-op opportunities and consulting projects are the bread and butter of the IBM program," stated Legg. "Both offer great exposure to real companies which lead to networking and possible full-time opportunities."

Graduating from Conestoga was only the beginning for Legg. Deciding he wanted to pursue his MBA, he began meeting with university recruiters. Worried that coming from a college background might affect his chances of getting into some highly competitive MBA programs, Legg was surprised to find out that the opposite was true. 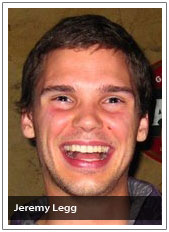 "I was the one who initiated the conversation on my education background with the MBA recruiters," said Legg, "because I was worried it may affect my chances of being accepted."

"Two recruiters I spoke with thought that the fact I came from a college background was refreshing because usually they only speak with university grads," Legg said. "Being unique in a recruiting process is usually beneficial."

Now working on his MBA (as well as working full-time for a major financial institution), Legg reflected on the benefits of his Conestoga education and the Conestoga faculty:

"Conestoga faculty are a wealth of knowledge because of their academic backgrounds," stated Legg, "and they have a wealth of industry experience that allows for additional insights."

According to Legg, his studies at Conestoga, and particularly the supply chain management case study projects he worked on made a direct contribution to his career growth.

Asked if he has any advice for someone considering the IBM program at Conestoga, Legg stressed the importance of co-op and making connections.

"Start applying for co-ops early and connect with your professors and pick their brains on life advice and academics," he advised. "And don't forget, you determine your future."