WIST celebrates a decade of success

On May 1, representatives from the Ontario Women's Directorate, the Ministry of Training, Colleges and Universities and Skills Canada joined in with students, graduates, faculty, staff and industry partners to celebrate the tenth anniversary of the Women in Skilled Trades (WIST) program in General Carpentry at Conestoga.
The event was held at the Roofing Centre at Conestoga’s Waterloo campus.

In a video address (youtube), the Honourable Laurel Broten, Minister Responsible for Women's Issues, pointed out that Conestoga was one of Ontario’s first partners in the WIST program, which facilitates women's access to employment in non-traditional trades through tuition-free training. 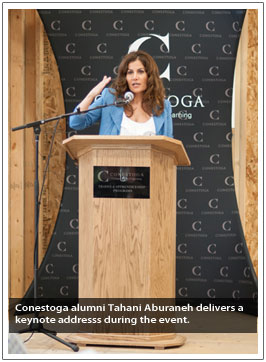 “Women’s economic independence and empowerment are key ingredients in a successful society,” said Broten, as she congratulated graduates, students and staff on the program’s success.

Conestoga president John Tibbits expressed thanks to the Ontario government for their support of the program, which has allowed Conestoga to provide education and training that has transformed the lives of many women across the community. In his remarks, Tibbits discussed the importance of partnerships between government, industry and training institutions such as Conestoga to address the issues of skilled worker shortages and youth unemployment that threaten Canada’s economic future.

Special guest speaker Tahani Aburaneh, a 1987 graduate of Conestoga’s Business Administration program, and now Canada’s leading women’s expert on real estate investment, encouraged the students and graduates to become the “writers of their own stories.” Aburaneh, who was born in a refugee camp and arrived in Canada as a young woman with no English skills, and who has fulfilled her dreams of successful entrepreneurship, advised students and graduates that they could find success through a combination of attitude, confidence and commitment.

Conestoga is a provincial leader in the delivery of trades and apprenticeship training, providing a comprehensive array of programs in construction, electrical, mechanical, industrial maintenance, welding and fabricating, motive power and cabinetmaking.