A class of Conestoga students raised the roof at this year’s Chairity Gala on March 18, collecting more than $11,000 for a local women’s shelter.
Hosted by the graduating group of the college’s Interior Decorating program, the second annual charity event drew about 250 guests and filled the Tannery’s Hub Theatre in downtown Kitchener to capacity.

The fundraiser featured both a silent auction and a live auction, allowing guests to bid on a total of 19 “up-cycled” chairs designed and created by students and faculty. All proceeds from the fundraiser were donated to Anselma House, one of two local shelters operated by Women's Crisis Services of Waterloo Region.

Margie Hedges, an instructor in the interior design program, said the students voted on their charity of choice back in November of 2012.

“There are a lot of young women in the program, and I think they chose a cause that's near and dear to their hearts.”

Students, who were broken into groups of two or three, rescued the old, unwanted chairs from thrift shops, individuals selling them online and curbsides throughout the city. Instructors then assigned them an element of design, such as colour, texture or shape, and they began transforming their trash into treasure. 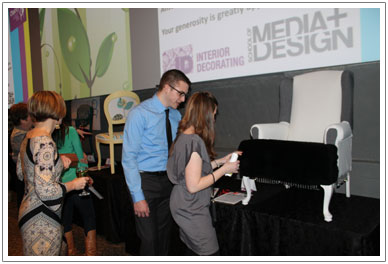 “We did everything from sanding to priming to painting to the fabric,” said Sarah Poole, a second-year interior design student.

Kenzie Whittal, one of Poole’s teammates, said her group found the chair on Kijiji for $50 and spent another $175 fixing it up.

“It was a lot of work,” Whittal said. “We met every Thursday all (first) semester to work on a different aspect.”

“The hardest part was the upholstering,” Poole added. “There were staples flying everywhere and we had to re-upholster it three times.”

Hedges said the purpose of the annual event, the brainchild of program co-ordinator and event emcee Leslee Squirrell, is two-fold.

“We want to encourage students to think about repurposing materials for home decor, but also to get them involved with learning how to network within the industry,” she said during the event. “They're going to graduate in three weeks and we challenged them to introduce themselves to at least three new people this evening.”

The students, who were dressed to impress, worked the room full of industry representatives and spoke to potential bidders about their creations. 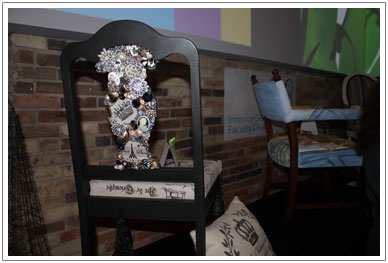 New to the gala this year was a table selling the artwork of students in their first year of the program. There was also a raffle, for which students secured prize donations from local businesses.

“In their client relations and sales course, students were responsible not only for selling all the tickets, but also for finding the donors for the raffle prizes,” Hedges said. “The idea was to create an opportunity for additional revenue.”

Another source of additional revenue for the 2013 edition of the event was a cash donation from Home Hardware’s Beauti-Tone line. The home improvement company also donated a chair designed by Montreal’s Simon Chang, which raised $825 during the live auction.

And while this year’s Chairity Gala was significantly larger than the inaugural fundraiser in 2012, Hedges expects it to keep growing along with the program. Launched six years ago with 22 students, the interior decorating program has 34 graduates in this year’s class and expects 66 in 2014.

“It's a very fast-growing program,” Hedges said. “We have an incredibly competent staff and everyone is a specialist in their own area. The students are learning from experts in the industry and it really shows at events like this.”