Conestoga names 2013 Athletes of the Year

The naming of male and female athletes of the year was among the highlights of Conestoga’s annual athletic banquet held on April 10 at Conestoga Place in Kitchener.
Female athlete of the year is Amanda John, a member of the outdoor and indoor soccer teams, and a second-year student in the Business Administration - Marketing program. A mid-fielder, John was named as an OCAA All-Star and Indoor Soccer All-Star. She also received an academic scholarship and was named her team’s MVP for outdoor soccer.

Coach Aldo Krajcar described John as a true impact player with a passion for the game, one who has the will to win and thrives in competition. According to Krajcar, “Amanda exhibited sportsmanship,a positive attitude and unyielding motivation both on and off the field. 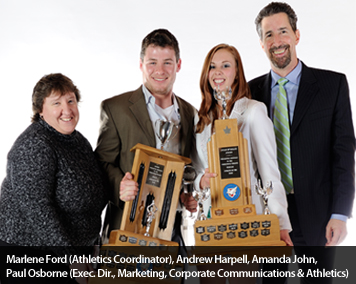 Andrew Harpell, a member of the varsity men’s rugby team and a second-year student in the Powerline Technician program, was named 2013 male athlete of the year. Harpell played scrum half in every game this year, helping lead the team to a second-place finish in the league and an unbelievably close OT loss in the playoffs that knocked them out of the gold medal game. He led the team in scoring with 30 points and was named an OCAA all-star and MVP of his team.

Coach coach Kyle O’Neill praised Harpell for “constantly leading the team by example and [being] the one to set the bar in the first 10 minutes of the game,” describing him as a fearless player, and arguably the team’s best tackler, who would take on anybody who got in his way. He is expected to be a key returning player next year.

In recognition of their accomplishments, both John and Harpell receive a cheque for $500, a school ring and individual trophies.

Academic scholarships supported through Conestoga’s Alumni Association and other events were presented to the following athletes: