Co-op Students of the Year Named

Two Conestoga students were recently recognized for excellence in job and academic performance as well as contributions to co-operative education and the broader community as they were named as Co-op Students of the Year for 2012. The awards were presented at Conestoga’s annual scholarship reception, held this year on March 28.
Alita Jones, a fourth-year student in the Architecture - Project and Facility Management degree program, completed a four-month co-op work term with Sun Life Financial. In her position, Jones worked with building operations and service requests and carried out project management for sustainability and LEED Existing Buildings, providing research and supporting various corporate real estate initiatives.

According to Sun Life representative John Vinken, Jones earned respect from both co-workers and senior executives, and excelled in both the quantity and quality of work she performed. Her positive attitude, strong work ethic and inquisitive desire to learn “raised expectations for future co-op students and showcased the skills acquired in her Conestoga degree program.”

Lisa Steele, a third-year student in the Business Administration - Marketing program, served as marketing coordinator for the Defacto Group during her co-op term in Winter 2012. In her role, Steele brought new efficiencies and new ways to conduct marketing to the company while assuming responsibility for a large number of simultaneous projects and scheduling project resources. 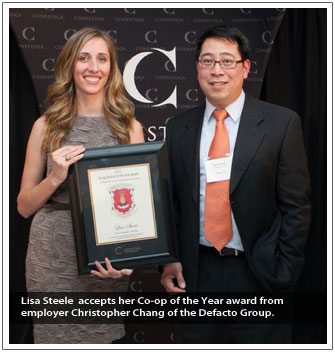 Company representative Chris Chang described Steele as “resourceful, organized, enthusiastic and amiable,” and affirmed that her efforts greatly exceeded company expectations. In addition to her work with Defacto, Steele is a volunteer speaker at student networking events, orientation sessions and other campus promotions, and plays an active role in Conestoga Students Inc. She also received a gold medal in the Ontario Colleges Marketing Competition in 2012.

As well as being honoured as one of Conestoga’s Co-op Students of the Year, Lisa Steele has also been named the Ontario Co-op Student of the Year for the college sector by Education at Work Ontario (EWO) and received Honourable Mention in the national co-op student competition offered through the Canadian Association for Co-operative Education. She will be recognized at the annual EWO conference in May.