For the second consecutive year, a group of Conestoga students took home the top prize for Structural Ingenuity at the annual CANstruction competition at Conestoga Mall in Waterloo.
The winning display, designed and constructed by about 25 students from the college’s Architecture - Construction Engineering Technology (ACET) program, featured characters from the popular children’s cartoon, Veggie Tales.

CANstruction, one of Food Bank of Waterloo Region’s most popular fundraisers, brings together teams of engineers, designers, architects and students from various disciplines to build intricate structures from thousands of cans of food. The fourteen designs were constructed on March 9 and displayed throughout the mall until March 17.

In addition to the Structural Ingenuity title, Conestoga received an award for five consecutive years of participation in the event. 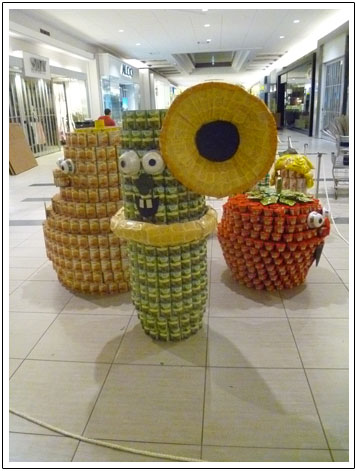 Conestoga’s design used about 3,600 cans totalling $4,500, all of which was raised by students over the past few months. Following the event, all of the food was donated to the food bank.

Jim Gerrard, a professor in the college’s ACET program, said the group decided on the Veggie Tales theme after narrowing it down to about 20 potential designs.

“Our main goal was to make the characters recognizable to the public,” he said. “We wanted to make sure people could see who these characters were without much difficulty.”

Jonathan Hyde is in his third and final year of the ACET program. He said the students hoped to convey the compassion of the food bank through their design.

“Veggie Tales promotes caring and taking care of the well-being of others, so keeping with that, we decided to go with that,” he said. “Raising awareness was the big thing, but it’s always fun to win an award too.”

The structure, which consisted primarily of cans of chick peas, green peas, asparagus and baby carrots, took about four and a half hours to construct. The only pre-built component of the structure was Larry the Cucumber’s tuba, which was made with individual tea bags wrapped in mesh and held together by chicken wire.

“Our committee met weekly since the beginning of January to brainstorm, design and fundraise for this event. Outside of these meetings, the students and I put a considerable amount of time into sourcing donations to buy the food and sourcing the food itself.”

Not lost on Hyde, who was participating in CANstruction for the third time, was the underlying purpose of the competition.

“Growing up, my family relied on the resources of the food bank once or twice, so I thought this would be a great opportunity to pay it forward and get involved in the community,” he said.

“It is very surprising to hear that more than 260 families require emergency food assistance every week, and of this number, 35 per cent are children,” Gerrard added. “Personally, I’m really glad we can give back to the community in some small way. Hopefully this act of compassion and charity inspires these students to give in other ways when they get out into the working world.”