After several months of competing against some of the top business students from across the globe, Conestoga's David Whelan advanced to the final round of an international sales competition last month.
Whelan, who is in his third and final year of the college's Business Administration - Marketing (co-op) program, placed in the top 20 at the World Collegiate Sales Open (WCSO) competition, earning him a trip to the finals at Northern Illinois University from February 22 to 23.

The journey began back in the fall of 2012, when Whelan entered the third annual competition along with 147 students from 28 schools representing a total of eight countries. He decided to participate in the event - the first Conestoga student to ever do so - on a recommendation from marketing instructor, Julie Brown-Wolstat.

Brown-Wolstat said she made the recommendation based on Whelan's skill set.

“David is a very sincere and focused sales representative who excels at the relationship component of sales,” she said. “His calm and sincere personality is what is needed in a long-term sales relationship and he is dedicated to having all the information he needs before meeting a client.”

The first three rounds of the WCSO were conducted remotely and scored students based on realistic sales scenarios. The tasks included leaving voice mail messages for a potential customer, securing a sales appointment with an administrative assistant and making a final sales call to a company's decision maker.

Whelan said the most challenging component of the first three rounds was persuading the administrative assistant to grant him a sales appointment.

“You’re basically assuming you haven’t heard back from the voice mail and you’re trying to get an appointment while the secretary gives resistance. The judges are looking for how well you interact with the gatekeeper and how well you articulate the purpose of your call.” 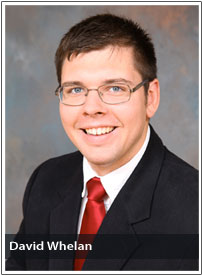 A number of cuts were made following each round, until only 20 contestants remained. Whelan, who was one of only four finalists from outside the United States, was invited to DeKalb, Illinois, where he competed in a number of events over the course of two days.

In addition to repeating the first three tasks with a new buyer, Whelan also had to write a follow-up email to his prospective customer, participate in two role-playing exercises, make two elevator pitches in a working elevator and host a reverse job fair, where he set up a booth in an attempt to attract employers.

“The final round was similar to the qualifying rounds to some extent,” Whelan said, “but the key difference was that it was more about fact-finding.”

While Whelan failed to place in the top four in the finals, he said his training at the college went a long way in helping him advance as far as he did.

“My course programs really helped with the competition and the college was really supportive,” Whelan said, adding that Conestoga paid for his trip to the finals and provided him with a banner and brochures for the reverse job fair.

Whelan said his co-op placements also played a role in his success.

“I've had a couple of appointments where I've been in similar positions, so it was good experience for that side of it.”

Brown-Wolstat, who said she didn't have any specific expectations for Whelan going into the event, was pleased with his top-20 finish.

“He definitely impressed me with his accomplishment,” she said. “David is not only a full-time student who works part-time, he was also pursuing an additional credential while preparing for, and competing in, this competition. This attests to his high level of dedication and his ability to multi-task and deliver excellent results in every area.”

She said Whelan's success also speaks volumes for the quality of Conestoga and its programs.

“It raises the credibility of Conestoga College to prospective students, potential employers for graduates and parents deciding which academic facility to recommend for their children,” she said. “For our program, it establishes the very high calibre of student and their capability in the world wide arena.”

Whelan, who will graduate this spring, said he hopes to find a job that continues to push him professionally.

“For me, it's about finding the biggest marketing challenge I can tackle,” he said. “It's not really industry- or job-specific, but more goal-oriented.”