When Daniel Levine volunteered to participate in Conestoga College's second annual Human Library, he didn't know what to expect.
But after four hours of sharing his story with fellow students, the Pre-service Firefighter student said it was a life-changing event.

“I was in complete shock by the impact that I had on people and the impact they had on me,” said Levine, 23. “I was very impressed with the positive feedback that I received, as well as the positive support and the kind words from the Conestoga community.”

The Human Library is an interactive form of storytelling in which “human books” share their experiences and answer questions from their “readers.” Founded in Copenhagen, Denmark, the innovative approach to communication is designed to promote dialogue, reduce prejudices and encourage understanding.

For the second consecutive year, Conestoga incorporated the Human Library into its Respect Week, which ran from March 4 to 8. The event was held at Doon's Library Resource Centre from 10 a.m. to 2 p.m. on March 7.

“We were really astounded by how well received it was last year and we knew we had to do it again,” said Ryan Connell, a student life programmer at the college.

According to Connell, Conestoga was the first post-secondary institution in Waterloo Region to introduce the revolutionary concept to its campus. He said the event was a great way for students to learn about one another in a safe and inclusive environment.

“The human library is a tremendous fit [for Respect Week] because it gives students a greater sense of knowledge and understanding about who they're sitting next to in the classroom or who they'll be working with out in the community. And once they have that understanding, they'll know how to build a stronger level of respect.”

This year's edition of the Human Library featured 15 “human books,” 12 of whom are currently studying at Conestoga. They ranged from a former child soldier to a student with a learning disability. Many of the stories, including Levine's, revolved around mental illness.

Levine, who will graduate this spring, said sharing his experiences with others was an opportunity to break the culture of silence around mental health issues, particularly in the world of fire fighting.

“I felt it was important for me to be a Human Book so I could share my story and break some of the assumptions and stigmas associated with the term 'mental health illness,'” he said. “I know that talking about what I went through, while going through it, saved my life. I was hoping to reach through to someone and make a difference.”

Connell said about 70 students registered as readers for the event, and many more dropped in throughout the day. Levine said he spoke to about 20 to 25 people, sometimes two or three at a time.

Each conversation lasted a maximum of 15 minutes. If students were unsure what types of questions to ask, they were provided with prompt cards.

“The most common questions for me were 'how do you feel now?' and 'how did you overcome it?'” Levine said.

Holly Featherstone is in her second year of Conestoga's Bachelor of Public Relations program. She is what she calls “an individual living with residual symptoms of an eating disorder episode that happened five years ago. 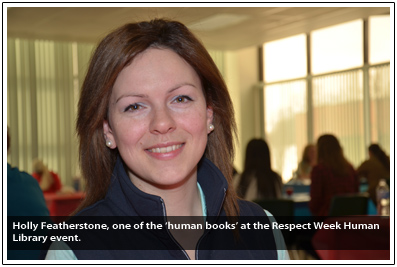 For Featherstone, 26, this year's Human Library was the second time she participated in the event.

“I knew my story was unique and that I had the ability to perceive the experience as a positive lesson in my journey of personal success,” she said. “Since I have been a natural communicator from a young age, I always felt comfortable talking about the topic of eating disorders to anyone curious to learn more.”

According to Featherstone, it is a topic which deserves more attention.

“It is a psychologically crippling illness that needs to be addressed as immediately as possible,” she said. “The problem is that eating disorders haven't yet found a distinct voice in society. In order for eating disorders to become less of an issue in the lives of sufferers, the topic has to reach the surface in day-to-day common dialogue.”

Thanks to events like the Human Library, Connell said, that dialogue is increasing.

“It's a great way for students to ask those questions they've always been afraid to ask,” he said. “And to get real, honest answers.”