Janina Robinson, a student life programmer with the college, said it was important to make the event accessible and applicable to both males and females.

“Something that was really important to us was that the event was open to all students,” she said. “The reason we focused our theme and perspective on global citizenship was so it was accessible to all students, and it's not a female-focused event.”

Ryan, a consultant and project manager with Mennonite Economic Development Associates, talked about her travel experience and her work with women overseas.

One of the things Ryan touched on was how far women's rights have come since International Women’s Day was established in the early 1900s. 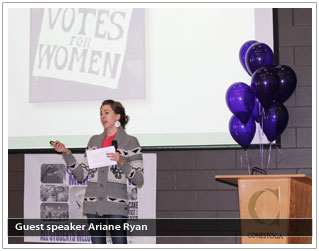 “The conditions for women in North America and Europe back then were very similar to what they are in developing countries today,” she said. “Women had no legal rights, they had very little agency over their own bodies, they could not vote, they could not own property and a lot of them couldn't even open a bank account.”

But as much as women’s rights have evolved, Ryan told the 50 or so students in attendance that there is still substantial work to be done.

“We've done a whole lot in the last hundred years and lots of change has gone on, but in the last 20 or 30 years we've really slowed down. We can see the finish line, but we're really starting to lose momentum.”

Robinson said the purpose of the event, which was organized by the International Women’s Day student committee, was to provide students with practical ways to make a difference - both locally and globally.

“Ariane talked about her experiences and making a direct link to what Conestoga students can realistically do,” Robinson said. “Not everyone can fly off to Libya, so what are the ways that individuals in our community can get involved as global citizens?”

The latter part of the day featured the college’s Clothesline Project, where students could donate spare change to decorate T-shirts recognizing the importance of respect in friendships and personal relationships.

According to student life programmer Ryan Connell, the project, which was introduced by the Women’s Resource Group a number of years ago, has become a staple of the Respect campaign’s success.

“When they disbanded a few years ago, we knew it was such an important initiative that we couldn't just drop it, so we adopted it,” Connell said.

Following the event, the T-shirts were hung in the Student Life Centre, where they will remain for the next week. All proceeds from the Clothesline Project will be donated to Women’s Crisis Services of Waterloo Region.

“More important though,” Connell said, “is the idea that we're able to have discussions about the importance of respect when it comes to relationships.”

Connell, who helped organize various events throughout Respect Week, said the celebration of International Women’s Day was a great addition to the college’s campaign.

“I think what's really cool about this day is that we're really stepping it up a notch when it comes to recognizing the importance of celebrating women as well as the challenges that still exist in our society,” he said. “It's a great way for us to provide more education and more knowledge.”