If you build it, they will come.
That was the concept behind Network 2013, the annual networking event hosted by Conestoga College’s Architecture - Construction Engineering Technology (ACET) program.

On the evening of January 24, the 2013 graduating class of the three-year diploma program gathered in the atrium of Conestoga’s new Engineering and Information Technology campus to showcase their term projects to industry representatives and prospective employers.

A total of about 55 students on 11 different teams crammed the western corridor of the college’s main floor in stylish suits and fancy dresses to present their miniature models of Conestoga’s student residence to local architects, designers, builders and engineers.

Brent Florica, a third-year student in the ACET program, said the teams had been working on their projects since September.

“A lot of time and effort went into these designs,” he said. “It’s considered the pinnacle of our career here at Conestoga.”

Florica, whose team received the highest grade on the term project, said the event was a great chance for the students to not only show local employers what they were capable of, but to also learn a little bit about the industry. 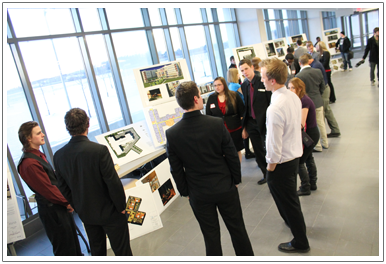 “It’s fantastic to get to talk to some industry people to get a feel for the real world,” he said. “We’re going to be leaving here in three months, so it’s a way to get some knowledge from people who have been in our shoes.”

A total of 28 industry representatives attended the event, each of whom had an information booth set up in the atrium. Students had an opportunity to visit the booths throughout the evening and learn more about the local companies and what they had to offer.

It was also a chance to meet new people, many of whom were Conestoga alumni.

Neil Aitchison, senior manager of market development at Melloul-Blamey, was a student in the first-ever class to complete the college's Broadcasting - Radio and Television program in 1970.

“Alphabetically, I was the first student ever,” he joked.

Melloul-Blamey, one of the largest general contractors in Waterloo Region, not only hires Conestoga grads on a regular basis, but was also founded by a pair of them. The multi-million dollar construction firm was started by Bernard Melloul and David Blamey, classmates from the college, in 1982.

Aitchison said Melloul-Blamey has about 50 employees who graduated from Conestoga, from carpenters to the vice president. Three of the company’s four current partners attended the college. 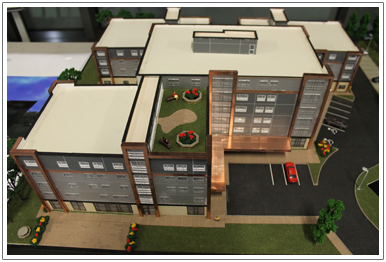 One of the reasons so many Conestoga students find work within the industry, Aitchison said, is the program’s sterling reputation.

“This is probably one of the premier programs the college offers,” he said. “It’s become the gold standard for a lot of the colleges across the province.”

According to Aitchison, events like Network 2013 are mutually beneficial.

“It adds tremendous exposure to the program while providing students a great stepping stone to their careers,” he said. “If I was a student I’d be making sure I meet every business, take every business card and follow up with every one of them.”

Glen Good, a faculty member in the ACET program, said the main purpose of the annual event is for students to get their foot in the door of what’s an extremely large and lucrative industry.

“For most of them, this is their first step to connect with the industry,” he said, adding that the term assignment is a great way for individuals and groups to stand out from the crowd. “The project gives them an opportunity to showcase their skills to a whole lot of people at once.”

Good, who said the event has been running for about 15 years and draws between 200 and 300 people annually, said the decision to host the event on campus is a conscious one.

“It brings the industry onto their turf so they can interact with them with less intimidation,” he said. “It creates neutral ground and a sense of comfort.”

Misha Wee-Armour, a third-year ACET student and teammate of Florica, said an event like Networking 2013 was an efficient and productive way to meet people in the industry without having to go knocking on doors.

“As someone without any construction experience it’s a great to have an event like this to build my confidence,” said Wee-Armour, who hopes to start her own business some day. “It’s a really incredible event. We’re so lucky to have such a supportive staff.”