Based on the success of their visit to Conestoga this past September, the Toyota Technical Skills Academy, a private Japanese high school that grooms students for executive-level positions with the multinational auto manufacturer, is planning to make a return visit next fall.
According to Tannis Gayler, program administrator of Conestoga’s School of Engineering and Information Technology, the relationship began last fall, when the Japanese students were in Canada for a two-week tour with Muskoka Language International, a Toronto-based English as a Second Language (ESL) program.

Last September’s full-day stopover included a tour of both Doon and Cambridge campuses, including demonstrations in the college’s mechanical and welding labs. The students from Nagoya, Japan also had a lunch of hotdogs and hamburgers in the Blue Room and played a spirited game of floor hockey in the Recreation Centre. 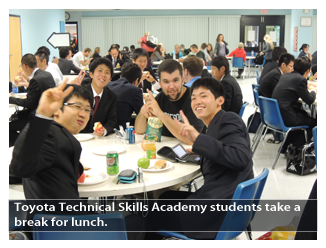 Gayler said the majority of the Toyota protégés had limited English skills, but that Conestoga’s student ambassadors did a great job of bridging the language gap. When conversation proved challenging, the students used body language and the translators on their smartphones to communicate.

Chris Renner, a student ambassador in his third year of the college’s Business Administration - Management program, said the cultural obstacles served as a real-life business experience.

“Due to the language barrier, this was a very meaningful experience as it provided me with the opportunity to communicate, think and learn while having fun,” he said.

Devan Bellagh, who volunteered as a student ambassador to improve his leadership skills, said it was also a great opportunity to work with others toward a common goal. “It was very encouraging to see how the leaders came together,” said the second-year Fitness and Health Promotion student. “They were energetic, positive and helped to make each activity run smoothly.”

Bellagh said the Japanese students seemed to enjoy themselves.

“They were a dream to work with,” he said. “I loved seeing the smiles on their faces and the camaraderie between them.” Gayler was impressed by how enthusiastic Conestoga’s students were in their various roles, and is already recruiting ambassadors for the September 2013 visit. “The student ambassadors went above and beyond showing the students our campus and explaining things to them,” she said. “I couldn’t believe the sense of pride they showed in their school.”