When the puck finally dropped at the Cambridge Ice Centre on Saturday, November 24, it all became real.

After more than two months of planning and organizing, a group of five Conestoga College students saw their term project come to fruition before their very eyes.

The students were from the college's Business Administration - Management program, the project a full-out fundraising campaign for the charity of their choice.

In the case of Alison Campbell's group, the campaign was a one-day charity hockey game raising money for Stop Concussions, an organization dedicated to raising awareness about head injuries in sports.

Campbell, who is in her second year of the three-year advanced diploma program, said she recommended the Toronto-based charity to her group members for personal reasons.

“A friend of mine had been working with them,” she said. “He had developed epilepsy from concussions, so he was very involved with them and it seemed like a great organization.”

According to Campbell, Stop Concussions was enthusiastic about the fundraiser from day one and actively involved throughout the planning process. Director Kelly Goulet, who played professional hockey in Germany before he lost his career to concussions, even served as MC for the event.

“They were really helpful in organizing everything,” Campbell said. “When you can get the charity on board, they're more invested in the project and your success.”

Dave Barrett, who teaches the project management course for which the fundraiser was assigned, agreed.

“I encourage the students to really get to know their charity and build a relationship with them,” he said. “It makes for a better project and a better overall experience.”

Barrett, who is now teaching the course for the eighth year, said he prefers to let the students choose the charities because it gives them extra incentive to go above and beyond.

“The reason I leave it open is because students often have personal connections with organizations,” he said. “One of the students who worked with Big Brothers Big Sisters (of Kitchener-Waterloo) used to be a little sister, so she had a special interest in that.”

Once Campbell's group agreed to support Stop Concussions, they decided a sports-related event would work best.

“We decided we wanted to do an event that people would pay to do regardless of it being for charity,” she said. “Golf tournaments always go over well, but being November we decided a hockey game would be fun.” 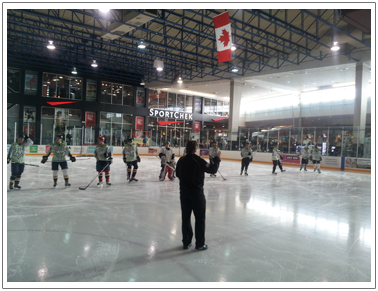 The group, which also included Jeff Carvalho, Renze Hou, Wade Metz and Kirstie Taves, booked the rink inside the Cambridge Centre shopping mall in order to reach as large an audience as possible.

They raised money by charging people $20 to play in the non-contact shinny game, which featured former NHLers Dennis Maruk and Todd Warner. They also held a silent auction, for which they sold tickets to patrons in the mall.

All of the raffle prizes were donated, the most popular being an autographed jersey from former NHL superstar Keith Primeau, who also had to retire due to concussions and now serves as Stop Concussions' chief relations officer.

A total of 20 players registered and, after expenses, Campbell's group raised a net amount of about $750.

Campbell said the team hoped to make $500, but that their main objective was to promote their charity.

“In a hockey town like this, our main goal was to raise awareness about concussions.” she said. “The money we raised on top of that was just a nice little bonus.”

In all, Barrett's class raised about $8,500 for 16 charities, which included Big Brothers Big Sisters of Kitchener-Waterloo, United Way and the Make a Wish Foundation.

Barrett said what made the hockey fundraiser so successful was not just the end result, but the dedication the team showed throughout the course of the semester.

“I was impressed by the scope and the size of this project,” he said. “The team chose something very challenging, but I think they succeeded because they were very passionate about it.”

According to Campbell, the team met several times each week outside of class and each member worked on the project from home. Campbell served as the unofficial team leader, delegating tasks that ranged from recruiting players and securing donations to drafting registration forms and buying insurance for the players.

“It was a lot of work,” she said. “Dave kept looking at us like we were kind of crazy because of how big an event we were putting on, but it turned out great.”

The biggest hurdle, she said, was booking the ice time. While there are countless arenas spread throughout the tri-cities, they wanted one with visibility.

“Cambridge Ice Park was always an option for us,” she said. “However, we weren't going to the audience there so we decided it would be more beneficial for us to pay that little bit extra to have a built-in audience in the mall.”

“There were a few little speed bumps along the way,” Campbell said, “but we learned a lot about planning, organizing and time management.”

Barrett said that is precisely why he prefers to have his students do the real thing.

“I believe you learn more by doing,” he said. “If they would have planned a hypothetical fundraiser, they wouldn't have had those issues of delegation and team members not showing up. Working through those kind of issues is real life, and I think those are important lessons to learn.”

According to Campbell, they are lessons that will last a lifetime.

“I loved this course,” she said. “You learn a lot about planning and taking that huge idea and breaking it down. It's good not just for event planning, but for planning anything in your life.”