Dressed in a sleek black suit and a sharp blue shirt, Alex Lee is the epitome of professionalism. His dark determined eyes shine from behind a pair of silver frameless glasses, his goatee is perfectly manicured. His silver watch glitters on his left wrist, just below the cuff. When you are as successful as Alex Lee has been, it is important to look the part.
Lee is a student in the college's Health Informatics Management program, and in three short years he has created quite a name for himself in local healthcare circles.

There was a time not too long ago, however, when Lee didn't know what the term “health informatics” meant. Nor that the field had an entire college program devoted to it.

Like many manufacturing employees in the midst of the 2008 financial downturn, Lee found himself at a professional crossroads. After some deliberation, he decided it was time for him to leave his job at Automation Tooling Systems in Cambridge and go back to school.

“When you're in that mechanical manufacturing field it can be a little scary to see where things are going,” Lee said. “You're seeing a lot of manufacturing going to China these days, and a lot of layoffs, so I thought it was time for a career change.”

At first, Lee considered something in the information technology or computer programming sectors. His mother had always wanted him to become a doctor, but despite having an interest in healthcare, Lee was always more mechanically and electronically inclined.

After a bit of research, Lee came across Conestoga's Health Informatics program and immediately knew it was for him.

“As I was looking for programs I was intrigued by this blend of healthcare and information technology and what it could do,” he recalled. “I thought it might be a good time to get into the field because it was new, it was expanding and there was definitely demand for it.”

Today, less than a year away from graduating with a Bachelor of Applied Health Sciences degree, Lee can't believe how far his choice has taken him.

“It's been a wild ride,” he said with a chuckle.

In the past month alone, Lee has added two more honours to his already distinguished academic career. 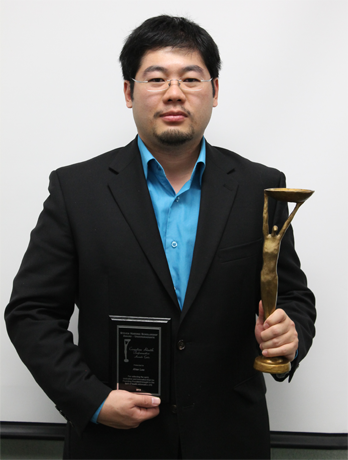 On the weekend of October 19-21, he and his team won the grand prize at a Hacking Health hackathon hosted by tech company, MaRS.

The challenge of the hackathon was to design and develop a technological solution to a real-world healthcare problem over the course of 48 hours.

Lee, who worked closely with entrepreneurs and health professionals from various fields, came up with an online platform called Community Links. The platform, voted by judges to have the most social impact of the 27 entries, connects patients and healthcare providers according to their various needs.

“For example,” Lee said, “say you've suffered a stroke and you need some rehabilitation or you need some speech therapy. Where do you go to find those things? Community Links will help you.

“There are a lot of great social and community programs out there, but how do you know they're there?” he added. “How do you get access to them?”

Lee, who also serves as the chair of the student-run Apps for Health committee at Mohawk College, said his experience at a hackathon in Montreal last February went a long way in preparing him for the tight deadline and giving him a better understanding of the industry demands.

“That's where I found one of those really great defining moments for our profession and our program,” he said of his time in Montreal. “I have a doctor with a problem on one side, I have a programmer on the other side trying to solve it, and they can't talk to each other. So I'm in between the two of them translating. It was a great experience.”

According to the event's website, the scholarship is awarded to a student who reflects the “spirit, dedication and innovation that the founding president (Steven Huesing) brought to the field of health informatics.”

“Alex is a champion for our program and the developing field of health informatics,” said Monk. “He is a keen student with a curious mind and always at the leading edge of new technological tools.”

Lee, who is the first Conestoga student to win the $1,000 scholarship, said the recognition speaks volumes about the quality of the college's program.

“It's a great testament to showing that our program turns out quality students … and that we are competitive.”

Lee believes that the co-op component of his program has also played a role in his success.

“My co-op experiences at the Erie St. Clair Local Health Integration Network and Community Care Access Centre really opened my eyes to the world of health care,” he said. “I learned about health care delivery and governance as well as the important role that community health care service plays.

“My current co-op position at Mohawk College's iDeaWORKS is giving me an incredible opportunity to learn health care application development and deployment from mobile to enterprise level.”

In addition to maintaining his consistently high grades, Lee spends at least 10 hours a week attending conferences and getting involved in extracurricular activities within the healthcare industry.

Not only does he chair Mohawk's Apps for Health committee, but he is also vice president of the National Student Forum for Health Informatics (NSF-HI) and serves as the health informatics representative on the Waterloo Interprofessional Healthcare Student Collaborative (WIHSC).

Through his multiple roles, he hopes to promote both the health informatics industry as a whole, as well interdisciplinary relationships with the fields it associates with.

“I believe heavily in interprofessionalism,” Lee said. “I'm going to be working with doctors and nurses in the future, so I'm trying to start doing that in college. It's nice to work with them now and build those relationships for the future.”

Lee credits much of his success over the past few years to the support of his professors.

“The entire faculty and staff have been really great. They always have time to talk to students and give us mentorship,” he said. “Conestoga has been phenomenal every step of the way.”