Conestoga’s School of Business and Hospitality got a taste of success on October 17, when one of its former students won a prestigious culinary competition.
Doug Burke, who graduated from the college's Culinary Skills - Chef Training earlier this year, was awarded the top prize in the student category at the third annual Courvoisier Collective. Holly Bruce, who also graduated from the program, finished third.

The challenge of the Courvoisier Collective was for students and at-home chefs to create new and inspirational recipes inspired by, and infused with, Courvoisier cognac. Entries could be either soups, salads, hors d’oeuvres or entrees.

Burke, whose lobster corn chowder earned him the honour of top chef and the $1,000 prize, said the win was unexpected.

“There were a lot of great dishes more complex than mine, so I really didn’t think I’d win,” he said. “When they announced I had won, I was really excited. My youngest son was there with me, so it was nice to see a smile on his face.”

Paul Torrance, chef-instructor at Conestoga College, said he had faith in his former student’s culinary concoction from the start.

“When Doug first submitted his recipe, I knew right away he was going to win. It wasn’t overly extravagant but it looked rustic and the puff pastry bowl really put it over the top.”

“Courvoisier was looking for a dish that had essences and nuances of the cognac but also complemented the food,” added Matthew Worden, the maître d’ and sommelier at Conestoga’s student-run restaurant, bloom. “Doug’s definitely did that.” 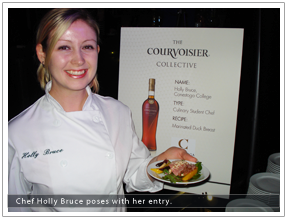 When Worden first heard about the competition over the summer, he thought it would be a great opportunity for the college to gain some exposure.

“One of my goals is to make Conestoga a college that is associated with culinary excellence and culinary achievement. Courvoisier is a big brand so if one of our students won it would be great exposure.”

Worden and Torrance also saw the competition as an opportunity to incorporate cognac-inspired cooking into the classroom.

“We thought it would be cool to theme our menu around the collective for a week,” Worden said. “Each student created a dish which we put on the menu and served to the public. We then encouraged them all to submit their recipes to Courvoisier.”

Of the course’s 16 students, about three-quarters of them did so. Burke, who had never heard of the competition, said it was something that interested him from the start.

“I really liked the idea of creating a recipe with the addition of Courvoisier. Also, seeing the response I could get from people was encouraging.”

When it came to deciding what type of dish to submit, Burke said he wanted to combine existing recipes to create something unique.

“I made a lobster bisque earlier in the course and enjoy the creativity that comes with making a soup,” he said. “I’ve seen chili in an edible bowl before, so I thought it would be a great presentation piece as well as adding to the dish’s flavour.”

Following the first round of judging, which took place on September 7, the finalists had to wait more than a month before the main event. On October 17, they gathered at Toronto’s Maison Mercer, where a panel of the city’s top chefs judged the presentation and flavour of the dishes.

Burke, who had the opportunity to work alongside elite chefs and have his chowder served at the event, said it was an exciting but nerve-racking experience.

“The judges were really poker-faced,” he said. “They tried my dish first and I couldn’t tell by their reaction if they liked it or not.”

Following his victory, Burke credited his education at Conestoga.

“The Conestoga culinary program has done wonders for my timing and my organizational skills. I like the fact we got hands-on kitchen experience as well as working in the front of the house.”

“The co-op aspect is great,” he said. “Most of our students are working somewhere and getting real kitchen experience the entire time they’re in school.”

Burke, who now works full-time in the kitchen of a high-end retirement home which feeds up to 100 people per night, said he is looking forward to entering more competitions in the future.

“The whole Courvoisier Collective experience has been great,” he said. “It’s something I’ll never forget.”