A Conestoga graduate has won an international award for her dedication to the field of operations management.

Julie White, who graduated from Conestoga's Material and Operations Management Program in June, was awarded the Voluntary Service Award at this year's APICSInternational Conference & Expo in Denver, Col. APICS is the international association for operations management and the world leader in training and certifying industry professionals.

The annual conference, which took place from October 14 to 16, drew more than 1,500 members from around the globe and offered various workshops and networking opportunities.

According to APICS, its Voluntary Service award recipients demonstrate a deep commitment to volunteering within their chapter and their community. Tracey Lopers, a professor in the college's Supply Chain and Operations Management program, said White was a perfect candidate.

“Julie demonstrates leadership in all her interactions,” said Lopers, who headed White's nomination bid. “She continually mentors students in the program and encourages them to write their exams.”

White, who lives in Cambridge and works as a purchaser for a construction company in Guelph, said she was shocked to win the award.

“I never imagined I would win,” she said. “The award itself is amazing, but the letters that my friends and peers wrote were incredibly moving and humbling.” 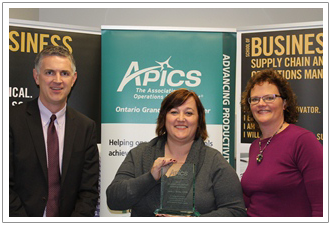 A member of APICS's Grand Valley chapter, White was the fourth Conestoga student to win the award - and the first since 2006. She said the achievement isn't something she could have done alone.

“My life has been blessed with an amazing group of people supporting and encouraging me every step of the way,” said the 39-year-old. White, who is married and has two sons, said she would like to share the award with her family.

“While I spent the last two and a half years going to school and building a career, they kept me grounded and reminded me why setting goals and achieving them was important.”

According to Lopers, another reason White was deserving of the award was her determination to achieve her Certified in Production and Inventory Management (CPIM) designation before graduating. Lopers, who serves as the college's faculty liaison to APICS, said the series of exams is traditionally difficult and requires a lot of studying. Nevertheless, she was not surprised when White became only the second student to earn her accreditation while still in school.

“When she gets an idea in her mind, she's going to make it happen,” Lopers said of her former student.

White, who said her time at Conestoga ignited an interest in lifelong learning, plans to pursue a Bachelor of Commerce and then an MBA.

“My two years at Conestoga College have been an extraordinary gift and have renewed a passion for learning and a commitment to excellence,” she said. “Faculty and students played a role in making this one of the most rewarding experiences of my life and helped to improve not only my life, but the lives of my family as well. I am deeply grateful and blessed to have had this experience.”