On the evening of October 17, the Roofing Centre at Conestoga's Waterloo campus was the centre of the bricklaying universe.

For the fifth consecutive year, the college hosted the Spec Mix Bricklayer 500, a masonry competition open to teams from across the region. This year, a total of 12 teams turned out to compete for the $3,000 top prize and an opportunity to advance to the World of Concrete Expo in Las Vegas next January.

Rene Letoile, coordinator of the college's masonry programs, said the annual event is a good way for the college to interact with local companies.

“The most important thing the event does from our side is that it keeps a close tie to the industry while giving exposure of our students to prospective employers,” he said. “The industry is very supportive of the masonry programs here at the college, and this is a good way for us to show our support for the industry while having a bit of fun.” 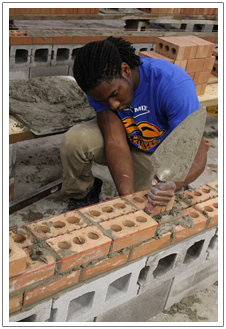 Fun as it was, the intensity surrounding the event was palpable. Despite the cool breeze blowing through the open doors of the Roofing Centre, competitors were sweating as they mixed tubs of mortar and carried it by the shovelful to their work stations in preparation for the contest. The crowd of about 50 watched from the balcony above in hooded sweaters and winter coats.

The competition itself was simple: lay as many bricks as possible in one hour. The only catch? They had to be level.

“They are judged on quantity, as well as quality,” Letoile said.

“The rows must be plum, level and line,” added Joe Plunkett, business manager of the Kitchener Brick and Allied Craft Union.

Plunkett, who also judges the event, said there are two separate awards - one for most bricks laid and one for craftsmanship. He said not all masons work the same way.

“There are various methods to lay bricks,” he said. “Some of them start by building a big corner, some of them build a small one. There’s a lot of strategy involved.”

According to Letoile, the average mason will lay 700-800 bricks in a typical work day; some of the teams, which each consisted of one bricklayer and one labourer, laid almost that many in 60 minutes.

By the end of the night, defending regional champion Filipe Orfao had laid 620 bricks, enough to win the event for the second consecutive year. Orfao, who lives in Cookstown, Ont., and has worked as a mason for more than 20 years, finished second at last year’s international competition. 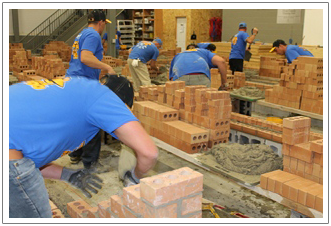 Students from both the college’s Brick and Stone Mason (Apprenticeship) Program, as well as the Masonry Fundamentals Program, volunteered at the event, assisting with everything from mixing concrete to ensuring the work environment was safe for competitors.

Devon Pearce, a student in the college's 16-week Masonry Fundamentals co-op, said he jumped at the opportunity to get involved.

“It was a great opportunity to help out and get experience as a labourer,” he said.

When one of the teams originally registered for the competition dropped out less than an hour before the event, two students had the unprecedented opportunity to throw on the bright blue T-shirts and work alongside the professionals. While Akil Goodridge and Nick Gilbert didn’t officially compete, they were able to gain valuable experience and network with local masons.

“They've been bricklaying for a few months while some of these other guys have been doing it for 15 years or more,” Letoile said of his students. “They couldn't really compete obviously, but they got some practice and got to meet guys in the industry.”