Public Relations students give back

On a cloudy afternoon in September, an entire class of second-year Conestoga students seized the opportunity to give back to their community.

The graduating class of the college's Public Relations program participated in United Way KW's third annual Day of Caring on Sept. 19. It marked the first time Conestoga took part in the event, which matches volunteers from various organizations with community improvement projects throughout Waterloo Region. 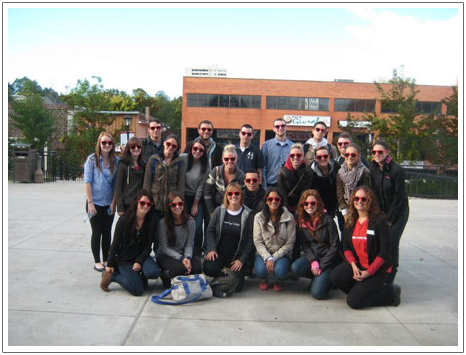 Paula Barrett, professor and co-ordinator of the Public Relations program, said the Day of Caring was a component of her Issues Management course, which deals with identifying, and adjusting to, potential crises in the workplace.

“This was a chance to shift from the campus classroom to the community classroom,” Barrett said. “We try to make the assignments as real-world as possible so that students can see both the pluses and the challenges they’re going to face in a real organization.”

The projects assigned to the student volunteers included everything from mural painting at the KW Multicultural Centre to yard work at a shelter for homeless and at-risk youth. 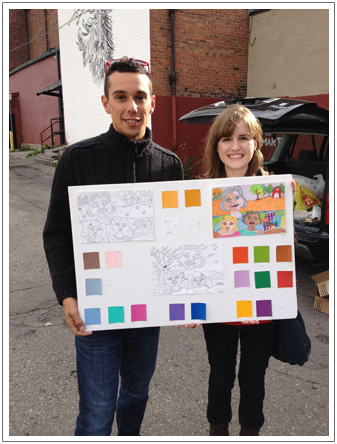 Taylor Dilks, one of the students who helped out at the Reaching Our Outdoor Friends (ROOF) site, said it was a unique learning experience.

“It gave us a look at what’s out there instead of being sheltered in the classroom.”

Dilks, whose group did some painting, gardening and landscaping at the youth shelter, said his favourite part of the day was getting his hands dirty for a worthy cause.

Barrett said regardless of which site the students were assigned to, their primary role was to serve as public relations ambassadors for United Way. In addition to the manual labour, their duties included interviewing corporate sponsors, writing volunteer profiles, taking photographs and utilizing social media to promote the organization's fall fundraising campaign.

Jan Varner, CEO of United Way KW, said Conestoga’s involvement in the launch was a mutually beneficial way to make a difference in the community.

“The involvement of Conestoga’s Public Relations students was a good demonstration of caring and how we can integrate learning with volunteerism,” she said. “It’s important for colleges and students to reach out beyond campus to remember that they are part of a larger community, one that needs their time and attention.

One of the unintended benefits of the experience, Barrett said, was the networking opportunity the event provided the students. One student was offered some writing work for a local organization, while at least two others secured long-term volunteer connections with charities. 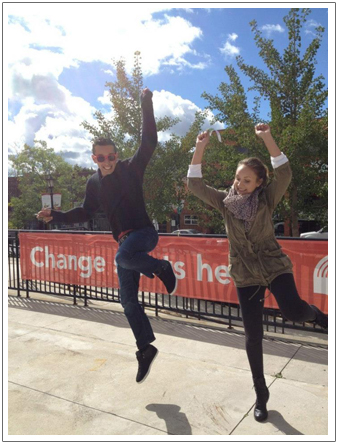 The experience, which Barrett referred to as “service learning,” also gave students a real-world sense of what it's like when a company and a charity connect for a social cause.

"It's one thing to talk about corporate social responsibility in a lecture, but this was a great way to see companies and charities working hand-in-hand to make the community better."

According to Barrett, the college's participation in events such as the Day of Caring is a great way to connect with the community and get word out about her program, which will celebrate its tenth anniversary next year.

“We’ve reached out to a bunch of charities that now know we have a public relations program and maybe those are charities we can connect with for future projects.”

Barrett, who said many of her grads end up working for charities and other not-for-profit organizations, plans to team up with United Way again next year.

“We have all these incredible skills and the ability to do some real good in the community,” she said. “It’s not just about gaining this experience, but also donating our skills and giving back.”