Nitika Oberoi and Heather Schaefer, students in the Bachelor of Interior Design program, were part of the winning team in a Charette competition at the IIDEX 2012 conference held in Toronto on September 20-21.

The students would have been thrilled to finish in the top three. “What I was hoping in the corner of my heart was that we’d get an honourable mention,” Oberoi said.

“When they called the honourable mention I thought, ‘Oh well, we didn’t get it,’” added Schaefer. “I was shocked when they called us up (as the winners).”

IIDEX is Canada’s largest national design and architecture expo and conference, bringing together 15,000 industry experts and 350 exhibitors in fields ranging from interior design to architecture to real estate. This is the first time Conestoga students have participated in the event.

One of the contests at this year’s expo was the sixth annual Charette competition, which put students from various disciplines together and challenged them to design a 1,000-square foot residence lobby for Toronto’s Ontario Place. While the guidelines for the design were fairly broad, the groups had to consider sustainability, incorporate sightlines to Lake Ontario, and promote community integration.

Oberoi and Schaefer, who were grouped with a landscape architecture student from the University of Guelph, focused heavily on the sustainability aspect and brought their design to life with the use of water. They used a sailboat concept for their floor plan and incorporated a 180-degree vista looking out at multiple water fountains leading to the lake.

“I think what made our project really successful was that we adhered to the criteria they gave us,” Schaefer said. “It had to have prominent architectural features and focus on the water aspect and ours worked.”

“We also incorporated sustainability a lot more than other groups,” Oberoi added.

One of the biggest challenges facing the winning team was that the architecture student assigned to their group didn’t show up. Despite being short-handed, and competing against many third-and fourth-year students, they managed to beat out the other eight teams for the $1,000 prize.

Another hurdle, Schaefer said, was the stress associated with the tight three-and-a-half-hour deadline.

“I was frozen at one point,” she said. “I had all these ideas in my head but I didn’t know how to get them from there onto paper.” 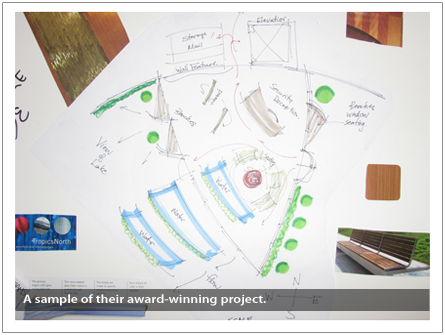 Added to the limited time was the fact that the three team members couldn’t always put into words the multiple ideas flowing through their minds. The solution was to use the sketching skills they had learned in the program.

“We communicated a lot through our drawings,” Oberoi said.

Wendi Hulme, a professor in the college’s Interior Design program, said the presentation portion of the competition was equally nerve-racking for her students, who had only two minutes to present their concept to a panel of three industry professionals.

“Not only were they presenting in front of a panel of judges, but also registered interior designers from all over Canada,” she said. “But theirs was the most complete.”

Oberoi and Schaefer will be among the first graduates of Conestoga’s four-year bachelor's degree program in interior design, which launched in the fall of 2011. They said they used many of the skills acquired in the program so far, including collaborative group work, the use of imperial scaling, presentation skills, drawing and understanding various concepts.

Hulme, who has experience in other interior design programs in Michigan and throughout Ontario, said Conestoga’s stands out because of the various skills it offers.

“This is a very unique program,” she said. “The entire first year takes care of all the technical things, including engineering and architectural, and focuses very little on interior design.”

First-year interior design students also work closely with the college’s Architecture - Project and Facility Management  program, which gives them lots of hands-on experience working with people in other fields.

While the program may keep the students busy, Hulme said, they seem to enjoy every minute of it.

“Let’s just say it’s a program that’s robust in content,” said Hulme with a smile. “But the students all love it.”