In an ultra competitive marketplace, opening a restaurant is about timing, research and months - if not years - of preparation. This timing is definitely not the case for Conestoga graduates Frederick (Freddy) Hayes and Jeremy Monforte. From property acquisition to opening day, these two friends opened their restaurant in two weeks, and they credit their education at Conestoga as a key factor in that quick turnaround time.
The business partners are graduates of the 2011 Hospitality Management - Hotel and Restaurant co-op program. According to Hayes, much of their early success is a direct result of the preparation they received at Conestoga. “We took all our experience in kitchens, went to school, listened and paid attention to what was being taught and then when we got into the world we realized that everything they taught us set us up to be successful here.”

Located in St. Jacobs, across from the St. Jacobs outlet mall and farmers’ market, their restaurant, The Crazy Canuck, is positioned to take advantage of growing tourist and business developments in the area, including a new Holiday Inn Express being built across the street. Hayes said that choosing their location came down to finding a spot that would see future growth and drive business - something they learned at Conestoga. “We did our demographic search, which we learned in school. We made sure our physical resource, which was another course, would have flow in the restaurant. It has just blown up for us.”

Much like the décor in their restaurant, Hayes and Monforte are an eclectic mix of personalities that seem to complement each other. The two first met at Conestoga, and soon realized they shared the dream of opening a restaurant. 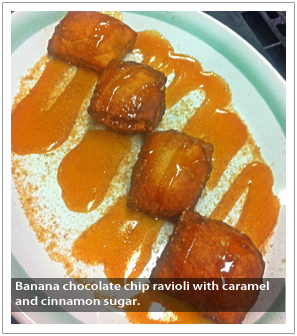 With Monforte’s strength in day-to-day operations and Hayes’ strength in the kitchen, they had a winning combination. Throughout their time at Conestoga, the two proved they had learned the skills they needed to succeed. “I actually got the hospitality foundation award for leadership and aptitude while I was at Conestoga.” Says Hayes. “Jeremy represented for Skills Canada and we both did a lot while we were there.”

According to Hayes, the restaurant has definitely exceeded their initial expectations. While the partners both work very long hours, often 15 or 16 hours a day, 7 days a week - both say that it is worth it and that Conestoga has helped them every step along the way. “Conestoga has had our backs the whole time. Anytime we have tried to do anything, or we have contacted teachers they have always been there to back us up.”

For more information about The Crazy Canuck, visit them on Facebook. 'Folded Arm' icon picture by Sylvia Pond