Conestoga Media and Design students continue to demonstrate their creative talent, winning multiple awards over the past month for their work in graphic design and advertising.

Applied Arts magazine, a leading publication in Canadian visual communications recently announced their list of 2012 student award winners. Among the winners from across Canada and the United States were two Conestoga students, Antonia Goga and Shenelle Pankratz, who collectively won three awards. The Applied Arts awards are among the industry’s most prestigious recognitions of creative excellence, showcasing some of the best up and coming talent in the industry. 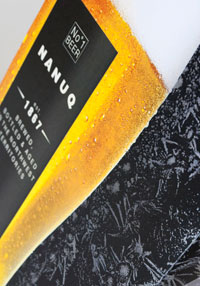 Goga, moving into her third year as a Graphic Design student won two awards, one for her submission titled ‘Ambition’ in the Design/Packaging category and the second for her work ‘Forever Forest’ in the Photo/Illustration and Mixed Media category.

Pankratz, also going into her third year in the Graphic Design program, was a winner in the Design category for her work in creating an entire branding campaign for the fictional NANUQ Beer Company.

According to program coordinator John Baljkas, June and July are often heavy awards months, with results coming quickly and often unexpectedly. “Many times, students aren’t even aware they have won an award because they don’t check their e-mails during the summer,” Baljkas explained. “They are on vacation or just busy.”

Conestoga students were also among the recipients of awards presented by the Registered Graphic Designers of Ontario in recognition of outstanding student achievements in the area of graphic design. As well as winning an award from Applied Arts, Pankratz also received the Hagon Award of Excellence for Western Ontario. Student Megan Lewis was the recipient of the Quarry Award of Excellence for Western Ontario, based on her submission of three individual projects. Each of the students received a $1000 cash prize.