For the second consecutive year, a class of Conestoga students rocked the runway in order to raise awareness about hunger in the local community. 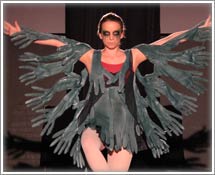 The college's second-year visual merchandising arts (VMA) students, who will be graduating this spring, hosted the second annual aWEARness Runway Performance on April 4 and 5. Over the course of the two-night event, which raised funds for the Cambridge Self-Help Food Bank, nearly 400 people filled the Hub Theatre and Tannery event space in downtown Kitchener.

The concept of the fundraiser was for the students to apply the various skills they had learned throughout the course of the program to organize and implement a successful fashion event. 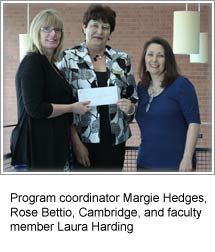 Margie Hedges, coordinator of the program, said what made the project so valuable for the students was that it focused on so many different elements of their education.

“Everything’s interconnected,” she said. “In the end, while they’re doing these big, beautiful outfits, they’re learning a ton of different things. They’ll be able to plan a fashion show, get the hair, the makeup, the music, everything.”

With assistance from first-year students and faculty members, the group was in charge of everything from securing and decorating the venue to approaching potential sponsors and balancing the event's budget.

Diana Mora, a second-year student in the VMA program, said the comprehensive involvement was one of her favourite aspects of working on the fundraiser.

“We had to take care of every little detail and make sure we weren't missing anything,” she said. “This kind of planning will be extremely essential for my future career.”

Fellow student Maria Kubicki said that the event also equipped the soon-to-be graduates with material for their portfolios and experience to help them find jobs in their industry.

“We had to deal with clients and vendors directly, which means that we acquired numerous valuable contacts and communication skills,” she said, adding that the fundraiser also showcased their talent to the artistic community. “This event has prepared us to enter the workforce with confidence.” 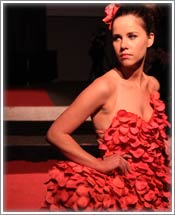 The centrepiece of the project required each of the 20 students to create an avante-garde garment or costume representative of both an emotion and an element of design, specifically line, shape, texture or colour.

Working on limited budgets, the students were forced to stretch their imaginations. What they came up with was a testament to both their ingenuity and their creativity; the garments featured everything from hula hoops and vinyl records to bristle board and rose petals, and one student's dress was made entirely of red duct tape.

In addition to designing and creating the garments, the students worked closely with students from Conestoga's broadcast-television program to create short films based on their design, which were displayed in conjunction with their runway performance. They also created artistic illustrations of their design, prints of which were sold to guests at the fundraiser.

Despite working on the project since September, second-year student Katie Breukers said the event didn't become real for her until she stepped onto the runway modelling her own creation, which combined the emotion of anger with the stylistic element of texture.

“I was able to witness the reactions of everyone during the performance and it was an explosive feeling.”

Breukers added that one of the elements that made the show so successful was how the entire class came together and bonded as a group. 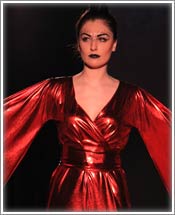 Kubricki, who also modelled her own garment, agreed.

“It was inspiring to see how everyone in our program came together to create such a professional show. We worked extremely hard to make this show a success.”

Not lost on Kubricki, however, was the underlying purpose of the fundraiser.

“By being involved in events that give back to the community, students are able to put their creative ideas towards the benefit of people in need,” she said. “Knowing that we were raising money for the Cambridge Self-Help Food Bank helped us stay motivated to try our hardest to achieve success.”

“I think college students are a big driving force in our community,” added Mora, whose creation featured the emotion of pride and the “line” design element. “We are young students who can create and start a big positive change within the city and by giving back and getting involved, we can motivate others to do the same.”

In addition to raising $3,000 for the food bank, the students also decided to set aside scholarship money for two second-year students in next year's class.

Hedges, who said the fundraiser exceeded expectations, plans to make the third edition of aWEARness an even bigger part of the program's curriculum next year.