Thanks to a pair of propitious partnerships, Conestoga’s robotics program has begun to position itself in the rapidly growing food industry. 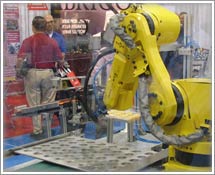 Since December, students in the Mechanical Engineering Technology - Robotics and Automation program have worked closely with Conestoga’s new Institute of Food Processing Technology (IFPT) and industry leader Abrigo Inc., to come up with automated solutions for the food industry.

Barry Bremner, a technologist with IFPT, said both the increased restrictions on sanitation and the fragile nature of handling food have led to steady growth in the industry. With this growth, he said, there is an increased demand for qualified workers, which is what prompted the college to open the institute in September 2011.

“The food industry is becoming very technically advanced and is having difficulty finding suitable hires,” he said. “The college getting involved in industry keeps us in touch so that we are working towards training students that are of value to them.”

“He came to see us and was very excited about working with the college,” Bremner said. “He believes that colleges and universities are the key to the future and he wanted to work with us almost from the first day.”

Abrigo, based in Brantford, Ont., specializes in design and maintenance solutions for the food industry. The company hoped that the college’s robotics students could help it troubleshoot its current operations, which include everything from icing machines to automated peanut sprinklers, and possibly design new ones.

What began as three students tooling a robot to place toppings cleanly and neatly onto cakes and pastries quickly evolved into an ongoing partnership and several groups of students working directly with Abrigo.

Bremner said that the real-world industry experience, which included a four-hour tour of Abrigo’s facilities and a first-hand look at its operations, will benefit them immensely when they graduate in August.

“They learned some very valuable lessons. I think it was extremely good exposure for them to look beyond building electronics and welding cars together at what robots are capable of.”

Grant Vlasic, a third-year robotics and automation student, said that while the project has kept him busy, it’s been well worth the extra effort.

“I was excited to be working on automation that is actually relevant to the industry, as well as working with our industry contacts and getting a better view of what is actually done out there.”

Vlasic said that some of the students have put more than 120 hours into the project since January.

From May 6 to 8, the college participated in Bakery Showcase 2012, Canada’s largest annual baking-specific trade show. According to John Tielemans, coordinator of the Robotics & Automation program, industry response was enthusiastic.  “Industry representatives were excited to see the level of talent available locally in our graduating students,” he said. “Having our students show their work was an eye-opener for them.”

Bremner said the opportunity, which was made available to the students when Abrigo offered to rent them floor space for the event, will benefit both the college and the food industry.