Conestoga's interior decorating program is sitting pretty thanks to its inaugural Chairity Gala on April 3, which raised $3,500 for the Hospice of Waterloo Region as well as funding to support a student scholarship. 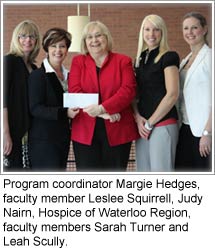 Brandy Hillar, a second-year student who participated in the event, said it is important for students to get involved in charity events like this one because it's a great way to give back and build relationships within the community.

"For us, giving to a cause like the Hospice of Waterloo Region, which has been an amazing asset to our community, was a way to show our support to the individuals in our program and communities whose lives and families have been affected by cancer."

According to Margie Hedges, program coordinator, the idea for the gala came from interior decorating instructor Leslee Squirrell, who also served as emcee and auctioneer at the event.

Squirrell's vision began with the idea of transforming old, unwanted chairs into beautiful and saleable pieces while incorporating elements of design taught in the program.

"We hoped the project would give the students an idea that something that appeared like junk could be made into something really great," Hedges said.

Students, who worked in groups of three, were given the concept for the fundraiser in September 2011 and spent the entire first semester working on their chairs outside of class. Hedges said it was typical for teams to spend at least 20 hours on the project, with some even meeting with local upholsterers and learning how to refurbish furniture.

In all, the class created 12 unique chairs, each of which adhered to a specific theme and featured design techniques the students had learned in the classroom.

Students and faculty then spent much of the second semester planning and organizing the gala itself. Tasks included everything from booking and decorating a venue to hiring a caterer to promoting the event and selling tickets.

"In the interior decorating program, we try to focus not on just one thing, but to help the students look at the whole big picture," Hedges said.

The ultimate goal of the assignment was to give students experience in operating and running an event from start to finish while honing their skills in areas such as design, creativity, sales, networking, communication and professionalism.

As much planning and organizing as the students did, Hedges was quick to add that the event wouldn't have been possible without the additional support of the program's faculty.

"There were at least six or seven part-time time instructors who devoted an inordinate amount of time to this project and they did it because they wanted to. They are just really amazing people."

Thanks to the collective efforts of the program, by the time the evening of April 3 arrived, everything was in place.

In addition to the dozen chairs designed by students, another 10 were donated by faculty members and renowned local designers including Lynn Spence, David Boyes, Karen Wilson, Albert Nazzarro and Marie-Josee Boily.

Throughout the course of the evening, each of the 22 chairs was sold through either live or silent auction. According to Hillar, the excitement surrounding the auctions was the best part of the evening.

"When the silent auction started, I remember checking the bidding sheet every five to 10 minutes, just to see the progress and how much people were willing to spend on our chair."

Hillar, along with teammates Kate Schmidt and Emma Ulakovic, designed a chair featuring new upholstering and lighting, which they entitled Candelabra. According to Hillar, the project took the team more time than they originally expected and presented some challenges they hadn't anticipated.

"Coming up with an idea on how to incorporate the lighting into our chair was the first road block," she said. "Then, when we decided to re-upholster a button-tufted chair, we had no idea how difficult and time consuming it would be. Luckily we started early on the project and we had enough time to finish the chair and pull off what we had envisioned for our Candelabra."

In addition to the experience of working within a team, Hillar said one of the major benefits of the gala was the opportunity for students who are graduating this spring to market themselves to potential employers.

Conestoga's interior decorating program was established four years ago. According to Hedges, events such as Chairity are designed to promote the college and the program, as well as the students.

"We're trying to get our program on the map and showcase what our students are capable of," she said."What we really want is for students to get jobs out of this whole thing."

Conestoga President John Tibbits, who was impressed by the passion and creativity he saw from the students and faculty, added that events such as this one are win-win for the college and the community.

Based on the event's success, which exceeded expectations both in terms of attendance and money raised, Hedges believes that the Chairity Gala will likely become an annual event for the program.