A group of Conestoga architecture students participating in an event to raise money and awareness for hunger in the community received an award for their efforts on Sunday, March 18. 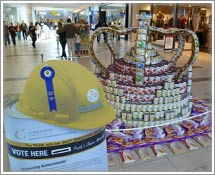 The group of 20 students and three faculty members, all from the college’s Architecture - Construction Engineering Technology program, received the prize in the Structural Ingenuity category at the fifth annual CANstruction event in Waterloo.

For the annual event hosted by the Food Bank of Waterloo Region and Conestoga Mall, teams design and build structures made entirely of dry food. Conestoga has participated in the local event since it began in 2008.

The college’s award-winning design, appropriately titled Crowning Achievements, was a large crown consisting of 3,400 dry food items. The structure, consisting mainly of canned vegetables with tea bags as jewels and a base of boxed cereal and bagged rice, was chosen by the group to celebrate the achievements of Queen Elizabeth’s 60-year reign.

Wendi Campbell, executive director of the Food Bank of Waterloo Region, said the crown was one of the most structurally interesting and thought provoking designs on display.

“Personally, it was one of my favourites,” she said, adding that the annual success of the event would not be possible without the college’s participation.

“I’m thrilled with the continued participation and support of the student teams,” she said. “It’s no secret that this event takes a lot of time and energy for the teams to create these masterpieces and we are grateful for the participation and enthusiasm of all.”

While a total of 11 teams participated in the event, and several other awards were presented, ACET instructor Jim Gerrard said he was ecstatic that the team’s work was recognized in the Structural Ingenuity category.

“In my books this is the best award there is at this event,” he said.

Gerrard said that when the ACET students were presented with the opportunity to participate in the event several months ago, there was no shortage of volunteers.

One such student was Greg Lynch, a third-year student who participated in the event last year.

“I participated last year and not only was it a blast designing and building the structure, I also felt it was a great way to help out a very respectful charity during the busiest time of the school year,” said Lynch.

Jordan MacLaughlin, a third-year student and first-time participant, said he hoped to leave a lasting impression and raise the bar for future teams before graduating in spring.

“I figured that this being my last year, I should contribute and try to make this the most successful CANstruction build our program has competed in,” he said.

First-year student Eric Sapiano said he was drawn to the event because the cause was close to his heart.

“Being somebody who has had a rough go throughout the past couple of years, I know how horrible it is to go to bed hungry,” he said. “I would never want that to happen to anybody else and I knew that with the competition I could help put a stop to that.”

While the build itself culminated in four intense hours late into the night of Saturday, March 10, the preparation and planning began more than two months ago.

According to Gerrard, the group first met in early January to brainstorm potential designs for the build. After narrowing the possibilities down to five, they met again a few weeks later and decided on the crown.

From there, the students met outside of class to discuss the practical details of the build, such as how many cans they would need, and the aesthetic details of the build, such as what size cans they would need and what colours would work best. They then drafted a design using a 3D computer program and conducted a trial pre-build of some of the areas they anticipated might be problematic.

MacLaughlin said one area of concern was the arms of the crown.

“A very big challenge throughout the design phase of the project was determining how we were going to construct the arms of the crown and have them supported at only the top and the bottom.”

Jake Dyet, a first-year student, said that while there were various challenges, the team felt prepared by what they learned in the classroom at Conestoga.

“The course work at Conestoga prepared our group for the build because we are taught to push the envelope and push the boundaries for designing buildings while still staying true to functionality. Everyone's ideas on how to make the different structures is a true testament to how our program really develops our thought pattern and how we approach projects in general.”

In addition to the technical challenges the team faced, there was also the ongoing issue of fundraising.

“I had to contact companies to see if they were interested in helping us, and a lot of them shot down this opportunity,” said Sapiano, one of the students assigned to fundraising. “At one point we were struggling for funds and had to make a choice as to carry on with it, or to stop and call it quits.”

Persistence paid off, however, and the group managed to raise enough money to purchase 3,400 cans at a retail value of over $3,500.

Gerrard said one of the things that impressed him most throughout the process was the students’ proactive campaigning.

“They did a great job going to the industry and getting them involved and donating money.”

In all, the event raised enough food for 25,000 meals as well as almost $4,000 in donations from mall patrons throughout the week.

Dyet said it is important for students today to not only focus on which skills they gain in college, but also how they decide to use those skills.

“The skill set that we are being taught now in school isn't just for high-paying clients, but it’s also for those in need. Our ACET program is very proactive when it comes to helping out, whether it's within our own city or the ravaged streets of New Orleans,” he said, referring to a Study Week field trip the program took to work on a build project with Habitat for Humanity.

Lynch, who is set to graduate in spring, said he hopes that student involvement in events such as CANstruction motivates others within the community to give back.

“I believe it is important for the college to spread its roots as far as possible to not only promote the college, but also to show that although students may be swamped 99.99 per cent of the time, they can always find the time to give back to the local community. This message is also normally very well received from the public because it gets the idea that, ‘Hey, if these young guns can do it, why can't we?’"