Conestoga showed its entrepreneurial spirit on March 28, when five teams represented the college at a local Pitch Night competition. 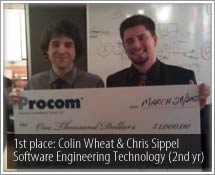 The Edge Challenge 2012 Pitch Night, hosted by Kitchener tech company Desire2Learn, challenged teams of local students to develop mobile application solutions that would improve or transform the education experience and pitch the ideas to industry leaders in five minutes or less.

A total of 15 teams from various high schools, colleges and universities participated in the competition. Four of the teams consisted of students from Conestoga’s School of Engineering and Information Technology, while another featured a pair of recent graduates from the college’s School of Business.

At the end of the night, Conestoga teams took home three of the top six prizes in the competition, including first and second place.

The five-judge panel awarded first prize to a team of second-year software engineering students for their TransitRun mobile app. The app, which locates nearby bus stops and displays their schedules, also won the team the inaugural Conestoga College 4X4 Challenge last month.

Sippel, who had to wing his team’s pitch from memory after their Power Point presentation was misplaced, said that the award was a pleasant surprise and that the main reason the team entered the event was to network with industry professionals.

“In the technology field it's all about image and reputation,” Sippel said. “When a student decides to participate in a 4x4 Challenge, Pitch Night or Edge Challenge, they are giving an image to people in the industry that they are motivated. It can help their future careers in so many ways.”

The Edge Challenge, also sponsored by D2L, will take place next month. The competition requires teams to submit a working prototype of their app as well as a video demonstrating how it works by April 30. The winners will receive $25,000 and a trip to San Diego for the ninth annual D2L User Conference in July.

Ig Kolenko, Chair of Conestoga’s School of Engineering and Information Technology, said that participating in events such as Pitch Night is a great opportunity for students to not only meet industry representatives, but also to learn from them.

“Whenever there is a chance for students to network with industry representatives, to have someone listen to their ideas with a critical mind, and to offer mentoring as an outcome, it’s a win-win for everyone involved,” he said. “Industry gets to see up and coming people and ideas, and students get a chance to be heard and make inroads in entrepreneurship.”

“A few weeks back we filed into the job fair that was hosted at the college and realized we had some issues with the way it was put together,” he said. “Job fairs are pretty much out-dated.”

The biggest problem, said Wood, is all the wasted paper and the resulting impact it has on the environment. Not only do students print out multiple resumes and cover letters in preparation for a job fair, but employers also hand out stacks of promotional materials.

The jobFair app eliminates this waste by allowing students to pre-register for career fairs, post their resumes and cover letters online and apply for positions directly from their smart phones.

As it turned out, the Edge Challenge Pitch Night was announced only a few days after the team conceptualized their idea.

“We took this opportunity to refine our service's process and build our promotional pitch,” Wood said. “We thought it would give us some insight on how much merit our idea had, and the $1,000 purse was pretty tempting too.”

Kolenko said it is this type of proactive risk taking that will get students noticed.

“Students who fear the unknown and don’t take the risks will never reap the potential rewards,” he said. “ And as can be seen here, the rewards can be substantial.

“I really hope that this year’s successes will inspire many more students to compete next year. It can only get bigger and better.”