Two Conestoga woodworking students finished among the top three in a recent competition held by the Architectural Woodwork Manufacturers Association of Canada (AWMAC). 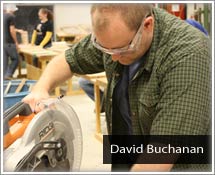 The challenge of the competition, open to students in apprenticeship programs in Ontario, was to construct a cabinet in nine hours or less.

Kitchener resident David Buchanan placed first. He credits the “great facilities” on the Conestoga Doon campus as an important part of his winning formula.

Francesco Abate, who placed third, is from Brampton. “It was exciting,” he said of his experience, adding that there was “a lot of pressure” during the competition, as woodworking industry professionals - possible future employers - were among those in attendance.

Buchanan received $500 for his winning efforts and Abate received $100. Both are grateful for the opportunity to put their skills to the test. Abate said he and Buchanan are each other’s primary competition in the Conestoga wood shop, always challenging each other as “one is always ahead of the other.”

Buchanan and Abate, intermediates in the three-year Woodworking Technology co-op program, proved that could compete with Humber graduates, and even beat them, as Buchanan did. Their program teaches the manufacturing process in making quality furniture, cabinets and architectural millwork, and allows students to learn woodworking theory while applying it to real-life situations in co-op placements.

A week before the competition, the competitors, from Conestoga and from Humber College, studied the plan of the cabinet they were to build. Both Buchanan and Abate are thankful for the support of their program co-ordinator Martin Grinwis, who helped familiarize them with all the tools and machines they’d need, go through the plan with them and answer any questions they had.

Well into the contest, Buchanan realized that the drawer to his cabinet didn’t fit. He had to build a new drawer - but still finished half an hour before nine-hour deadline. Abate finished his cabinet a full hour before the deadline.

Grinwis was also one of three judges in the competition. “I saw them make mistakes (during the contest),” he said, “but I couldn’t say anything.” The cabinets were labelled only with numbers for anonymity and fair judging."

The National AWMAC Apprenticeship Contest is held annually in each of the association’s eight chapters. According to Daena Rundle, account manager of AWMAC, the purpose of the contest is to “allow new millworkers to show off their skills and promote the industry.” Conestoga students have been participating in the contest for over 10 years.

Buchanan’s cabinet, as well as the seven other winning cabinets, will go on to the final competition held at the annual AWMAC conference at Niagara-on-the-Lake in late May.

AWMAC is committed to improving quality standards and keeping up to date with the industry’s new products. The organization also strives to connect the industry’s chapters, improve contracting methods and achieve uniformity in the industry as a whole.