More than 30 students from Conestoga’s School of Engineering and Information Technology participated in the college’s inaugural 4X4 Challenge over Reading Week. 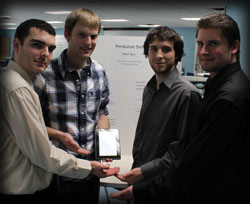 The event, which gave students four days to design and create four unique mobile application and embedded device solutions over the course of four days, took place from February 21 to 24.

Ig Kolenko, Chair of Engineering and Information Technology at Conestoga, said he organized the challenge not only to give students an opportunity to use the knowledge they’ve gained  in the classroom, but also to promote entrepreneurship in the technological departments at the college.

“The ultimate purpose of the event was to expose our entrepreneurial spirit here at Conestoga to the world,” he said. “Hopefully it creates opportunities for students and creates a way to showcase their skills.”

A total of 10 teams registered for the event. About half of the students worked out of the college, while the other half worked specifically on solutions for RIM products at the Communitech Hub in downtown Kitchener. RIM, which co-sponsored the event and donated five BlackBerry PlayBooks to the college, had development staff on site to guide and support the students.

Christoph Boves, a second-year Software Technology student, said it was a resource his group used often as they developed and revised their strategy on an app designed to pinpoint and store the exact location of a user’s smartphone using GPS.

“Having the RIM support available right when you needed it was really cool,” he said. “I don’t think you can put a price on that.”

Adam Stanley, senior application development consultant with RIM and one of the support staff on site, said one of the improvements he saw throughout the week was the students’ increased commitment to teamwork.

“What stood out to me is that these students recognized the importance of building strong interpersonal skills and have found ways to leverage each other’s strengths within their groups,” he said.

Stanley added that extracurricular events like the 4X4 Challenge give participants a competitive advantage over other graduates in the industry.

“Not only (does) it provide a great experience for developing professional skills but it can also be an achievement they can highlight for future employment opportunities,” he said. “I would encourage more students to take advantage of, and participate in, future events like this.”

Kolenko, who ran a consulting firm before working at the college, agreed.

“This is the kind of thing that is going to put you head and shoulders above other people,” he said. “It grows your skills, it shows you have initiative and it shows you have a mindset for taking a risk. I used to be an employer, and I would look for those kinds of qualities and traits when I was hiring.”

While most of the students said they registered for the event to gain real-world work experience and to network with industry representatives, there was a competitive component to the challenge, as well as $400 in prize money up for grabs.

The winning solution was a mobile app for Grand River Transit users which locates nearby bus stops and displays their schedules. Some of the other projects included a Conestoga bookstore app, a hardware solution for elevator companies and an app which would allow users to register and validate their parking from their smart phone.

Winning team members Chris Sippel, Dylan Corriveau, Brendan McFadyen and Colin Wheat, all second-year Software Engineering students, said the best part about winning was knowing there was a demand for their product.

Sippel said that while it was nice for his group to be rewarded for their hard work, the real prize was the experience itself.

“The reason we entered the challenge was for the experience and the networking opportunities,” he said. “Winning was just a bonus.”

Following the event, Kolenko said he was overwhelmed by both the amount of interest the event generated, and the quality of solutions the students came up with.

Kolenko said the event wouldn’t have been possible without help from Communitech, RIM, Clearpath Robotics and Cambridge Elevating, and that he is already looking forward to next year’s challenge.