“This is a rare opportunity for us,” Doug Lockston, a faculty member of Conestoga’s School of Trades and Apprenticeship Training, said with a smile. 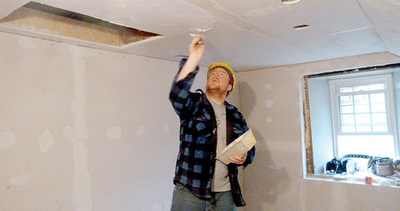 Over the last two weeks, Lockston’s 40 second-year students were busy drywalling and plastering the old farmhouse, which will become the resource house for rare Charitable Research Reserve’s new ECO Centre.

Setting aside the play on words, Lockston explained that working on the “rare” project allows his students the experience of working on an old home and the chance to work alongside seasoned trade professionals who might one day employ them.

The current class of construction students is the latest of three classes to have honed their skills on the Resource House in the last few years.

While rare has hired professionals to plumb, wire and insulate the former farmhouse, the Conestoga students have been involved in gutting much of the building, installing new energy saving windows, framing the building’s interior, rebuilding the porch and roofing part of the structure.

Lockston said that since the college started offering an outreach program, which is aimed at assisting area non-profit groups upgrade their facilities, it has helped 15 groups and donated approximately $650,000 in materials on those projects.

“It's been wonderful to have the students here,” said Patti Leather, rare communications manager. “They’ve been able to achieve a lot in very little time.”

Once completed, the upper level of the resource house will become live/work space for visiting national and international researchers. Meanwhile the main floor will be public space used for classrooms and meetings. The new kitchen will also become a centre for learning and preparing food grown on the 913-acre nature reserve.

The resource house and the adjacent historic Scottish slit barn will become rare’s ECO Centre, a centre for interpretation and education.

The rare ECO Centre is slated to be completed this year at a cost of $1.7 million. To date, $1.1 million has been donated to the project. The organization has also received a $500,000 matching-fund donation from the Trillium Foundation.

Leather explained that in order to keep the $500,000 donated by the Trillium Foundation, rare has to raise an equal amount of donations from the community.

“We are going to need all of that money,” Leather said. “We have to try to match the $500,000 from the foundation, but the money raised to date cannot be included, nor can the gifts in kind we have received in materials and services. It has to be all new money.”

Donations to support the project can be made by calling 519-650-9336 or online at www.raresites.org.