A team of four Conestoga accounting students is $2,500 richer after finishing second in the college's debut performance at the CMA (Certified Management Accountants) Case Competition on Saturday, January 28. 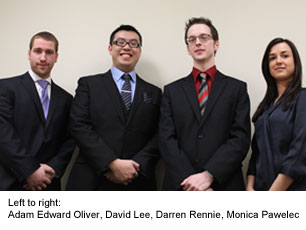 David Lee, Adam Edward Oliver, Monica Pawelec and Darren Rennie, all second-year students in the college's Accounting, Audit, and Information Technology program, made up the first team to ever represent Conestoga at the seventh annual event.

Team captain Darren Rennie, who participated in a CGA (Certified General Accountants) competition as a first-year student last year, said he didn't know what to expect going in but knew the competition would be tough.

The competition unofficially began when the group was given background information for a case study on the Thursday before the main event. The aptly-named Team TryHard took full advantage of those 72 hours, meeting several times to analyze the case study, review their text books and discuss their strategy. They also received guidance and advice from Dr. Steve Hummel, one of their instructors.

Rennie said the preparation left the team feeling confident for the six-hour, computer-simulated main event on Saturday, which tested skills such as problem-solving, decision-making, budgeting, time management and teamwork. Nothing, however, could have prepared the team for the thrill they experienced when, at the end of the day, they learned they had finished with the second highest score.

"Having a goal and working towards it and having it pay off feels really great," Rennie said. "We were just happy to be there representing the college, so when we had our names called it was an unbelievable feeling." Team member Monica Pawelec said it was also reassuring to know all of the hours spent in the classroom and in the library over the past year and a half are paying off. "It was very validating," she said. "We didn't know how we would compete on a large scale, and to come in second place showed that all our hard work in school is paying off." David Lee, who organized the team and also serves as the college's CMA ambassador, said he is grateful to Dana Gies for telling him about the opportunity. Lee said Gies, the CMA regional marketing manager for Midwestern and Niagara Ontario, encouraged the college to compete in a domain traditionally dominated by universities.

According to Lee, one of the most satisfying aspects of his team's success is that it showcased the talent level of the college.

"It shows that Conestoga, and especially our program, can compete at a university level."

Dave Smiderle, chair of Conestoga's School of Business and Hospitality, said that while he was extremely impressed with the students' success he wasn't overly surprised.

"It is indicative of the calibre of students that we attract here at Conestoga. It also shows that our courses and faculty are preparing our students well to deal with situations they would encounter in the business environment."

Smiderle added that the college's AAIT program is unique in that it offers both the classroom theory students would get at university as well as the practical, hands-on experience typically offered at college. Since 2009, certification from the four-year degree program has been recognized by the Certified General Accountants of Ontario (CGA), the Certified Management Accountants of Ontario (CMA), the Institute of Chartered Accountants (CA) and the Institute of Internal Auditors.

What impressed Smidlerle most about the students was their initiative to spend time and effort above and beyond the requirements of their regular course load.

"This group clearly demonstrated they are self-starters. It's a great predictor of their future success and will definitely improve their employability," he said.