The recent grand opening of Conestoga’s School of Engineering and Information Technology at the new South campus came complete with special effects, thanks in part to a group of students from the college’s Robotics and Automation program. 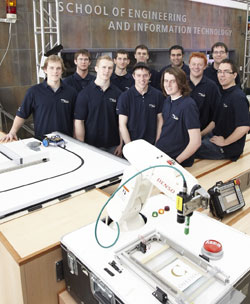 A group of 12 second and third-year students from the program designed and built a mechanism to unveil the new signage in a dramatic fashion. The device, referred to as a Rube Goldberg machine, consisted of a robotic arm, a robotic car, a solar panel, and various triggers and switches that worked in succession to lower a curtain and reveal the school’s name.

John Tielemans, program coordinator, said he was approached two weeks before the ceremony and asked if his students could come up with an interesting way to present the logo. He said he passed the task on to Henry Kastner, an instructor within the department, and the students took it from there.

“It was totally their design, and in the end they did a job that apparently impressed the minister so much, he was still talking about it weeks later,” Tielemans said.

The Honourable Gary Goodyear, Minister of State (Science and Technology) and Member of Parliament for Cambridge-North Dumfries, the Honourable John Milloy, MPP for Kitchener Centre, and Regional Chair Ken Seiling were all in attendance at the late January ceremony.

Matt Henrich, a second-year student who worked on the mechanism, said the experience was well worth the 10 to 12 hours the group spent perfecting the robot outside of class.

“It feels satisfying that we put all that work into it and everybody got to see it run flawlessly,” he said.

Henrich said the project also taught him the importance of being able to work with others toward a common goal under pressure.

“I got some valuable teamwork experience,” he said. “We had a deadline to complete this and worked as a group to finish it on time.”

Julie Gillis, manager of donor relations and stewardship at Conestoga, said she was glad the ceremony incorporated students from the college’s School of Engineering and Information Technology, which is based at the new campus.

“I think the students did a great job given the tight timelines they were working under,” said Gillis. “I’m very pleased that we were able to include an engineering theme as part of the opening.”

The new 260,000 square-foot campus, located on Highway 401 directly across from the college’s Doon campus, is the main site for Conestoga’s School of Engineering and Information Technology, as well as the Institute for Food Processing Technology.