A group of two dozen Conestoga College students are learning a lesson in recycling at the Fire Hall Museum and Education Centre on Dickson Street. 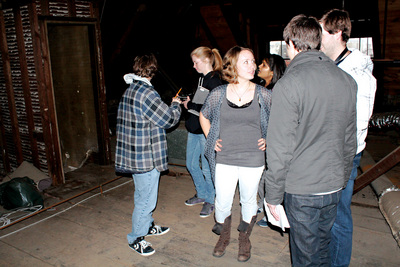 The second-year architecture - project and facility management students are using the old fire hall for a studio as they study the adaptive reuse of an old building, looking at the use of sustainable, new technologies in interior renovation.

This is the fifth year the students have used the museum as a test bed for their ideas and concepts. Working in groups of four, the students have previously transformed the Old Galt Fire Hall into everything from trendy boutiques and restaurants, to a children’s library, on paper.

The students recently had their first visit to the museum where they explored the structure, from its chiselled bedrock basement, up to the attic and the third floor entrance to the old hose tower.

“I love museums. This place is amazing,” said one student.

This year, museum officials are asking the students to look at coming up with a concept that could become part of the renovation plans for the vintage building.

“For years we’ve looked at what might be done with this building,” museum curator Jim Westwood told the students. “What we’d like you to do is give us your ideas on what can be done with this place. We want to try and think outside the box here.”

Teachers are challenging students to use their opportunity to get creative.

“This is great project for our students,” said Prof. Ron Bean. “It’s no longer just a theoretical exercise for them. It turns it into something that might actually happen, which is quite exciting.”

Museum officials, working with City of Cambridge staff, have put together a multi-phase redevelopment concept for the old fire hall which could be implemented some day with the approval of council.

Those plans would see a gradual overhaul of the building, which was constructed in 1898. It proposes the reinstatement of the building’s original arched front doors and the re-roofing of the brick addition at the rear of the building that was once a horse stable.

Several groups of Conestoga students, as part of their project, will look at how best to use the available space in the building and develop designs that will bring the fire hall into the 21st century.

“One of the important things this project will do is teach our students how to work within the building code - something they’ll have to do when working in the real world,” said Prof. Colin McGugan, an engineer, who teaches mechanical and electrical services

In coming up with their concepts the students are being asked to incorporate green technologies to save on future energy costs, as well as make the building’s upper floors accessible to the physically challenged.

In the coming weeks museum officials will meet with the students again to further map out their requirements for the building. The students will then go to work on developing their concepts, which should be completed by the end of March. In early April the concepts will go on display in the museum.

This article by Ray Martin originally appeared in the Cambridge Times, January 23, 2012. Photo by Ray Martin.