The Sanctuary was nearly overflowing on November 24, when former NHL superstar Theo Fleury spoke to Conestoga students for the college’s Health and Wellness Week.

Fleury, who played over 1,000 games in the NHL, collecting a Stanley Cup and an Olympic gold medal along the way, is now a motivational speaker and full-time advocate against the sexual abuse of children. 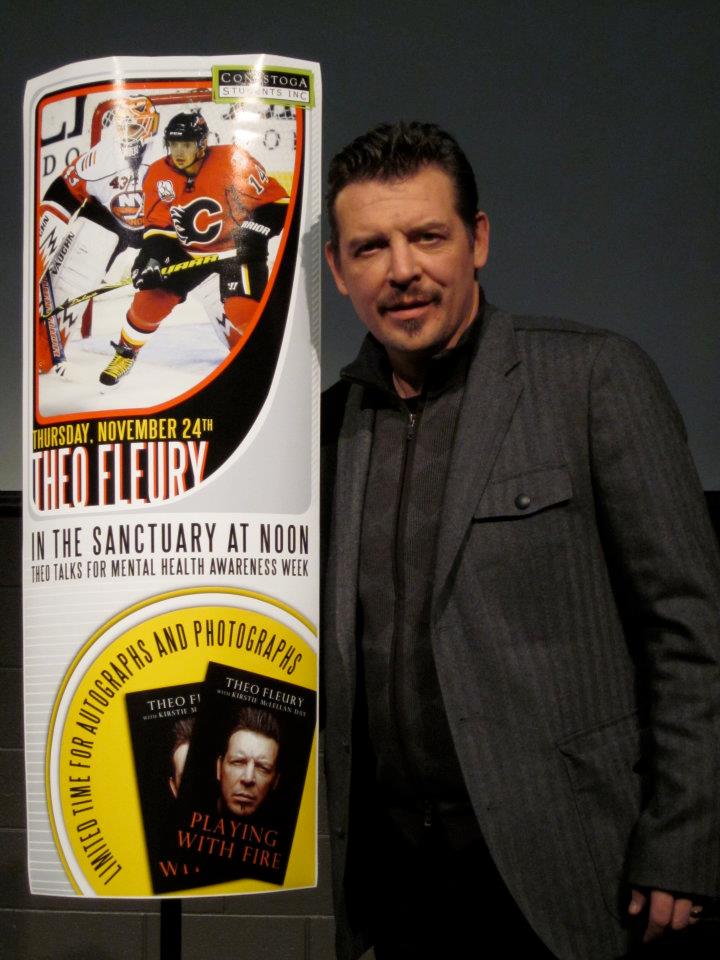 "I want to get as many victims of child sexual abuse into recovery as possible," Fleury told the nearly 200 students in attendance. "I want to empower them, I want them to take control of their lives."

"Child sexual abuse is the biggest epidemic we have on our planet," Fleury said, adding that one in five boys is abused before the age of 18.

His presentation, titled Don’t Quit Before the Miracle, encourages victims of sexual abuse, both past and present, to come forward and seek help.

Fleury alleged in his 2010 best-selling memoir, Playing With Fire, that former coach Graham James had sexually assaulted him more than 150 times over a three-year span when he was a teenager. The reason it took him 27 years to come forward, said Fleury, is that there is a stigma attached to sexual abuse.

"We have to get rid of the stigma around not telling," Fleury said. "The more we keep the secret inside, the sicker we get."

The book, which Fleury wrote in an attempt to help others, also helped him to define his own future. “I was just trying to write my book and get as honest as I could and then all of a sudden I found the purpose of my life.”

Fleury is also pushing adults who know about, or even suspect, sexual abuse against children, to come forward. "You would think it’s kind of odd that one of your players would be spending two or three nights a week at the coach’s house. That’s not normal," he said of his own case. "At the end of the day, I wanted somebody who knew to come forward."

"I have one stand: if an adult has even the slightest suspicion that a child is being abused, it is your duty as an adult to stand up for that child and do something now! It’s simple."

"It’s important when these types of stories come out, that we try to protect the victims as much as we can,” said Fleury. "We protect the abusers and re-victimize the victims. It’s backwards."

Parents also have to be more proactive in their children’s lives, Fleury said. "If your kid suddenly becomes quiet, uninvolved or he’s acting out, it’s a good sign he’s suffered some kind of trauma."

While Fleury has not seen a decline in sexual abuse over the years, he said more people than ever seem to be coming forward. "I've seen a shift in a short amount of time, but we still have a long way to go."

The key, said Fleury, is to never give up hope.

"We all have miracles," he said, “we just gotta go find them.”