Jonathan Sinke, who graduated from Conestoga’s cabinetmaking apprenticeship program in November 2011, was awarded the bronze medal in cabinetmaking at WorldSkills London 2011, the world’s largest international skills competition for young people. 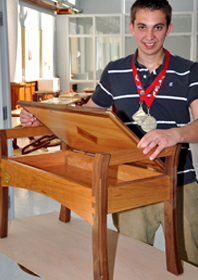 Sinke, 22, also took home Canada’s Best of Nation Award for earning the highest marks of all Canadian competitors in the competition. He was one of 34 Canadians aged 17 to 22 to represent their country at the event, and one of four to win a medal.

The WorldSkills event, which takes place every two years, was held in London, England from October 5-8, and featured competitions in skills ranging from aircraft maintenance to landscape gardening to robotics. More than 1,000 young competitors from 51 countries or regions competed in the event, which drew more than 200,000 spectators, including British Prime Minister David Cameron.

Mark Bramer, Canada’s representative expert in cabinetmaking with Skills/Compétences Canada, was not surprised when his former student and protégé won a medal.

“Jonathan was an excellent student,” said Bramer, who instructed Sinke at Conestoga and trained him over the past year specifically for the competition. “His natural passion and drive brought all this together and he performed exceptionally well.”

The road to Sinke’s success in cabinetmaking, however, began much earlier. Growing up in Jordan Station, Ont., Sinke always loved working with his hands and followed in the footsteps of his father, who was a builder. Sinke took full advantage of his father’s shop, and what began as a hobby soon became a passion.

After graduating with top marks in high school, Sinke decided to attend Conestoga for its Ontario College Certificate program in cabinetmaking. The program, one of more than 20 full-time apprenticeship programs offered at Conestoga, includes eight weeks per year for three years at the college, with time split between the classroom and the shop. The bulk of the training, however, comes from 8,000 hours of hands-on work experience over four years.

Of his experience at Conestoga, Sinke said, “I was very impressed with the teachers and facilities. Coming here has given me many opportunities, such as competing at Skills.”

Bramer believes that there are a number of contributing factors to Sinke’s success, including his time at Conestoga.

“When you win at a world-level competition, it is usually a combination of factors that helped you achieve that medal,” Bramer said. “Johnny had a good family upbringing where he acquired a strong work ethic. He did his apprenticeship with a master craftsman from England and learned a lot. He took the apprenticeship program at Conestoga College and had about eight to ten different teachers all adding to his knowledge.”

This combination of skills and experience has not only earned Sinke awards and medals, but also a job doing what he loves. Sinke is currently working for a company in Vineland that specializes in custom furniture, building things such as cabinets, mantles and entertainment units.

Sinke has aspirations to start his own business one day and is optimistic his experiences in events such as WorldSkills London will help him do so.

“The stories of past competitors who successfully started their own businesses after competing at WorldSkills competitions (is) a source of inspiration for me,” Sinke said. “Being able to have a plaque in my office saying I’m the best in Canada, will help me gain the trust of clients and definitely help me in the future.”