Three outstanding graduates from the Class of 2011 were recognized for their achievements during the fall convocation ceremonies held at Conestoga on Saturday, November 5. 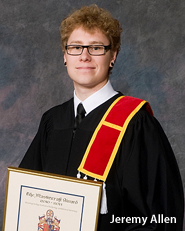 Established by former Conestoga President Kenneth E. Hunter, this award recognizes outstanding technical achievement by an individual or a student team in the creation of a program-related technical project. The prize consists of an inscribed and framed program shield, plus a cheque for $500. Conestoga presents two of these awards each year - one at the spring Convocation, the second at the fall event.

Jeremy Allen of Listowel entered the Mechanical Engineering Technology - Design and Analysis program in Fall 2008. For his award-winning project, he designed a unique drive train and braking system for Conestoga’s baja car. The design was centered on a 2-stage helical gearbox with parallel input and output shafts for use in off-road vehicles. It reduces the shaft speed of the propulsion motor down to the required speed of the drive wheels. Allen’s design was awarded first place in competitions at both the program level and the college level, based on its skill level, creativity and quality.

Jeremy Allen is now working as a tool designer for Intech International, a company that specializes in custom automated welding systems for the nuclear industry. 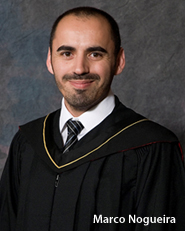 The President's Scholar Award, a specially inscribed and framed Conestoga Coat of Arms, recognizes the graduating student from a four-year degree program who achieves the highest composite academic average for all courses.

Marco Nogueira from Kitchener entered the Bachelor of Applied Technology program in Integrated Telecommunication and Computer Technologies in Fall 2007. He looked forward to the opportunity to explore the science of engineering both in-class and in co-op terms as he worked to better understand and explore the world that we live in, including the unseen phenomenon of radio transmissions.

In his four years of study at Conestoga, Nogueira achieved an overall academic average of 93 per cent, the highest of all this year’s degree program graduates.

Marco Nogueira is now employed as a Digital Radio Designer with the Advanced Radio Systems group at Research In Motion, where he is part of a leading edge research team that works in the area of future radio Research & Development. 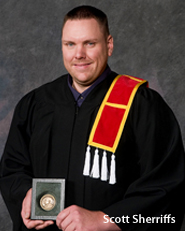 The Governor General's Academic Medal recognizes the graduating student who achieves the highest composite academic grade average for all courses in a diploma program. The award is a bronze medallion commissioned by the Governor General of Canada.

Scott Sherriffs of Kitchener is a two-time graduate of Conestoga. He first graduated in 2001 with a Business Administration Diploma in Management Studies. After completing a Bachelor of Science in Kinesiology at the University of Western Ontario and graduate studies at McMaster University, he returned to Conestoga in 2009 in the Renovation Technician Diploma program.

Sherriffs completed the program in Spring 2011, earning an A+ grade in every course, and an academic average of 98 per cent.