They broke into spontaneous dance Monday in a Waterloo grocery store to kick off the annual Thanksgiving food drive. 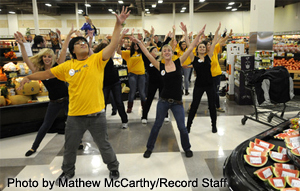 A flash mob of about 20 Conestoga College students danced to the Beatles’ hit Help in the middle of the produce department of the Sobeys grocery store at 94 Bridgeport Rd. E.

“Help me get my feet back on the ground. Won’t you please, please help me?” rang out the song’s lyrics as the students displayed their fancy footwork.

“We are rocking,” said Justin Beyerle, 21, one of 46 second-year recreation and leisure services students who took on this campaign by the Food Bank of Waterloo Region as a class project.

“We are trying to create awareness for the food bank,” said Beyerle, who like his classmates sported a yellow T-shirt which, in blue writing, asked people to donate peanut butter, cereal and canned meat and fish, “So no one goes hungry.”

The flash mob’s performance was videotaped by the college’s media and broadcasting students and will be available on social media such as YouTube.

Elaine Shea of Waterloo was picking up a few food items when the flash mob erupted.

“It was kind of neat. It sure got your attention,” Shea said. “It made my day.”

The goal of this fall food drive is to raise 375,000 pounds of food, the same goal as last year, said Wendi Campbell, executive director of the Food Bank of Waterloo Region.

One of the successes of the annual Thanksgiving food drive is the Oktoberfest parade where spectators in the past have donated nearly 16,000 pounds of food and about $15,000 in cash, Campbell said.

Another successful event is Halloween as many groups collect food door-to-door for programs such as Trick or Eat, which is run by university students.

“This is the time of year when we ask people to donate a little bit more because that is what is going to take us up over the top,” Campbell said.

The demand for food continues to be high as the effects of the recession continue in the community, she said. Food bank usage has increased by 28 per cent since the recession started in September 2007.

The food bank distributes about three million pounds of food each year to 71 community programs. Last year, about 26,000 people needed emergency food assistance, of which almost half were children under 18.

This food drive includes targets of other food assistance networks such as the Cambridge Self-Help Food Bank.

Bonnie Dion of the Cambridge Self-Help Food Bank said her group needs to collect 105,400 pounds of food to serve the needs of that community.

“There is a big need. We are servicing about 1,400 families a month” with emergency food hampers, Dion said.

This story was originally featured in the Record. For more information, contact fbarrick@therecord.com