Turning motorcycles into something special

It’s amazing what people will pay for something if they know nobody else has it.

The 38-year-old Rockwood native and St. James Catholic High School grad is in big demand these days as the owner of FlatOut Industries, designers and creators of one-of-a-kind custom racing motorcycles.

“These are all designed, manufactured one-of-a-kind components. These parts do not exist anywhere else,” Mance said.

His latest project is the Tapout bike, which was unveiled at the recent Ultimate Fighting Championship (UFC) event in Toronto. Before that was the Cheetah energy drink bike that was featured in numerous commercials during the NHL playoffs.

The 26 bikes he has done since 2004 include ones for most of the major motorcycle companies, one for Adidas, and several private buyers who want that one bike nobody else has.

Mance, who just sold his own Ducati 848, designs and creates the parts he puts on bikes.

“There are far too many people out there calling themselves custom motorbike builders. It’s a term that’s far overused,” he said. “It’s easy to get a bunch of catalogues, order a bunch of parts, put them on a bike and call it ‘custom.’ ”

On the Tapout bike there are 18 custom parts designed and made by Mance, ranging from the handlebar setup to the kick pedals and gas cap.

His current project isn’t a motorcycle, it’s a bicycle: one that has an illuminated frame. It will be presented to Lance Armstrong at the annual Ride With Lance fundraiser in Waterloo at the end of August.

The bicycle will then be used as part of the fundraising for Grand River Hospital in Kitchener.

There is also a corporate project for a customer in Dubai and numerous other projects in discussion.

“And just think, it all started from doing some parts for free,” Mance said.

It all started for Mance about 10 years ago. A big fan of the Discovery Channel show American Hot Rod, he made some concept components for free and sent them to the show.

Eventually, that led to a meeting and work making custom motorcycle parts for Jesse James of West Coast Choppers fame.

“That notoriety started getting me interest and demand in the custom world,” said Mance.

In 2003 he started selling sport model components “basically door-to-door with the dealers,” and that promptly led to custom orders.

Lee Wallace, owner of the south Florida-based sportbike magazine BlingRockets ( www.blingrockets.com) said the issue that featured Mance’s Cheetah energy drink bike remains one of the most popular in the magazine’s two-year history.

“He (Mance) is one of the few doing this because he can actually manufacture cool stuff. Not many people have the tools to do that,” Wallace said.

"It’s one-off stuff: one-off parts that people drool over and can’t have.”

Wallace can’t wait to feature the Tapout bike in his magazine.

FlatOut is located at Mance Manufacturing Ltd. in Guelph, the company started by his father Victor and where his mother and brother also work.

When he’s not working full time at Conestoga College, Mance is there, using his design skills and the specialty technology and machines available at the Watson Road plant to make components that transform factory bikes into something special.

It takes Mance six to eight weeks to fully customize a bike, from design to completion. He only works on one at a time.

“You can only come up with so many so fast,” he said. “When people come to you for exclusivity, you have to come up with exclusive ideas, not just parts.”

This story originally appeared in The Guelph Mercury, written by Tony Saxon. 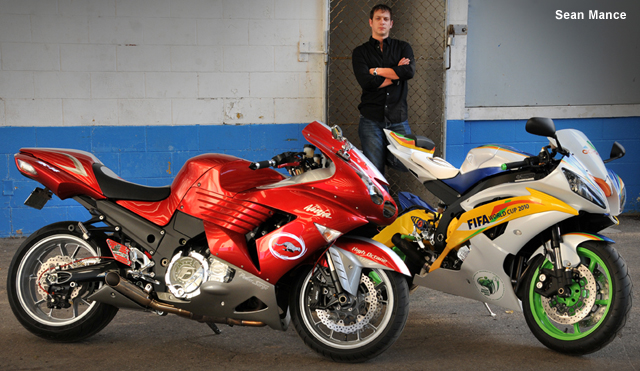