Conestoga College is becoming an education magnet for engineering students from the Czech Republic, nurses from India, and food scientists from China.

Ontario’s colleges once existed primarily to train a local workforce for local jobs. But that has changed dramatically at Conestoga, one of the first in Ontario to capitalize on the cultural, educational and financial advantages of an international outlook. 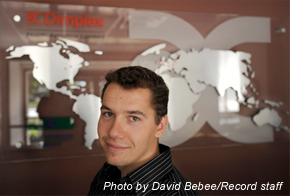 “We see this as really important,” said Conestoga’s president, John Tibbits. “It’s good for us, it’s good for this community.”

The major companies, such as Research In Motion, that are driving the economy in this part of Ontario, “every one of them is competing globally,” he said.

This fall, Conestoga will see a 50 per cent increase in the number of international students it admits, to 324 full-time. It’s a small but fast-growing number out of nearly 9,500 full-time students overall.

Tibbits said studying abroad is good for Canadians and for foreign students alike. And also, with anticipated skill shortages in this country, “some of these students hopefully will stay here,” he said.

“It looks very positive,” said Alan Vaughan, Conestoga’s executive director of registrar services. “China is opening up so much more to the West, both in tourism and in business.”

Some of the foreign students bring extra revenue to the college, since they pay higher tuition. At $10,500 a year, it’s about three times as high as what a Canadian student would pay. Most programs at Conestoga charge tuition of $3,500 to $3,800 for Canadian students.

But it’s a price that is willingly paid in a competitive job market. “In China, it’s something that differentiates them,” said Vaughan. “An international credential is highly valued in China, and also so is the English language.”

Foreign students, and foreign employers, also prize the hands-on learning style that Conestoga and some other North American institutions have developed.

European universities emphasize theory, but some North American schools use a concept called “project-based learning.” The student learns the theory and almost at the same time, the concept is reinforced by some practical application.

It’s “one of the most innovative methods in education,” said Tony Martinek, a retired engineering professor at Conestoga and a founder of the transatlantic project.

In this approach, timing is everything, preparation is key and the teacher’s role shifts - as some British commentators have put it - “from the sage on the stage to the guide on the side,” said Martinek.

Foreign students appreciate the added value to their studies.

“I learned more in Canada than I would do in the Czech Republic,” said Lukas Zofka, a graduate student in engineering. For nearly a year he has lived in Waterloo Region, studying and doing two co-op work terms under the supervision of Conestoga and University of Waterloo.

Zofka, 25, said “the biggest plus” is the co-op experience, something he wouldn’t likely get in Europe. He’s at Dimplex North America in Cambridge, helping to design solar power collectors that will heat water less expensively.

And the project-based learning he got in the classroom was “helpful,’ he said. “It prepares you for real life.”

“You study the theory and the application in the same moment.”

On top of all that, he knows that the year on this side of the Atlantic Ocean has had many benefits: Extra oomph on his resume, a better command of English, and a chance to experience the many sides of North America, from Florida to the Canadian Rockies.

“I like the international environment,” he said. “It’s amazing to experience.”

Originally posted in The Record on July 22, 2011 Story by Luisa D'Amato, Record staff.