When it comes to sustainability, it pays to look at the big picture. That was certainly true for second-year Conestoga students Alita Jones and Chad Magier, who were recently named as recipients of the Canada Green Building Council Andy Kesteloo Student Award for sustainable building design. 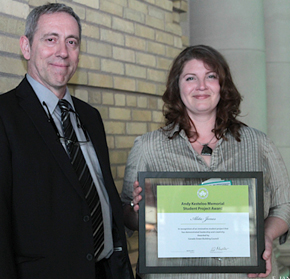 The award is presented annually by the Canada Green Building Council to recognize a student project that demonstrates leadership, innovation, inspiration and a creative vision for the future of green building. The national student competition in sustainable design is open to second and third year students enrolled in college or university programs across Canada.

For their project, Jones and Magier spent four months planning and designing a Galt City Core Office Building for their Studio class in the Architecture - Project and Facility Management degree program.

Jones said that designing a building that works for the people using it was at the top of their priority list. First they considered the needs of the office. Then they designed the building to suit, including sustainable elements.

Instead of taking an existing building design and tacking on green features, they looked at an entire design system and integrated sustainability throughout. Their winning design used everything from storm water management to high efficiency systems to green and cool roofs. And the judges noticed.

“Your commitment to sustainability is obvious and you have the right perspective,” one judge commented in written feedback.

Knowing that she’s on the right track is important for Jones, who, at 32, is in her second round of post-secondary at Conestoga.

“It gives you a sense that you’re heading in the right direction,” she said, “that what we’re doing makes sense.”

The award included a $2000 cash prize, along with admission to the Canada Green Building Council National Symposium where Jones attended educational seminars she said will be useful for her co-op term with Enermodal this summer. 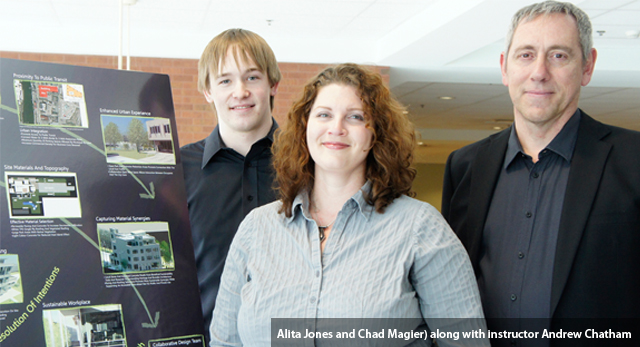