Conestoga Honours Athletes of the Year

Conestoga College celebrated the athletic achievements of its students at the 43rd Annual Athletics Banquet held on April 7. Kerri Lantz was named Conestoga’s Female Athlete of the Year, and this year’s Male Athlete of the Year award went to Jason Smith. In total, Conestoga presented 39 Ontario Colleges Athletic Association (OCAA) All-Academic awards to athletes with GPAs of 3.5 or greater. 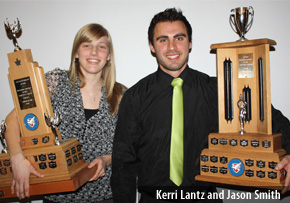 “The honour of Athlete of the Year is given to individuals who exemplify Conestoga’s varsity athletics,” explained Paul Osborne, Executive Director of Athletics. “Their skills are unquestionable, their dedication and leadership to their team is immeasurable. They must represent athletics and sportsmanship and be students in good standing.”

For the last five years, Kerri Lantz, Female Athlete of the Year winner, has been a member of the women’s outdoor and indoor soccer teams and is the first five-year athlete at Conestoga College. She is currently in her final year of studies in the Public Relations program, having already obtained a Diploma in Business Administration. Kerri also took home the Coaches’ Award for Indoor and Outdoor Soccer, the Indoor Soccer Scholarship, and an acknowledgment from the OCAA as an Academic All-Star.

Jason Smith, Male Athlete of the Year winner, is a third-year student in his final year of the Construction Engineering Technology - Architecture program. For the second year in a row, he won the OCAA Individual Gold Medal for cross-country running with a time of 26 minutes and 01 second, finishing ahead of 90 other runners from colleges across the province. Jason went on to represent Conestoga at the national championships at St. Thomas University in Halifax and finished fifth in competition with 146 runners from across Canada. He was also member of the Ontario Conference team which placed first overall.

Jason was named the OCAA Male Athlete of the Week for Nov. 1, as well as being named to the OCAA All-Ontario Team. At the Conestoga Athletic banquet, he was also awarded the Men’s Cross Country Running Most Valuable Player award and also a scholarship.

Conestoga’s Athletes of the Year each took home a plaque and a cheque for $500 in recognition of their tremendous achievement.

For more information about sports at Conestoga, contact Marlene Ford at 519-748-3512 ext. 3452 or mford@conestogac.on.ca or visit the Conestoga website.