Conestoga faculty members Geoff Johnstone and Duane Shadd are the newest members of the college’s Athletics and Recreation Hall of Fame, which recognizes individuals who have made a significant impact on varsity, intramural and recreational activities. The induction ceremony took place on April 7 at the 43rd annual Conestoga Athletic Banquet held at the Knights of Columbus hall in Kitchener. 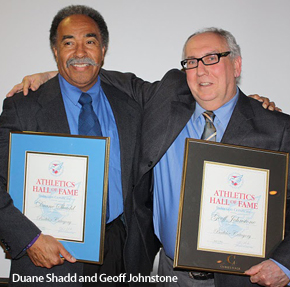 Geoff Johnstone has served as a faculty member in Liberal Studies since 1970. In 1971, he brought his love for soccer to Conestoga by founding the first men’s varsity soccer program. Realising the need for a woman’s program, Johnstone founded and coached the first women’s varsity soccer team in 1989. Under his leadership, men’s and women’s soccer teams at Conestoga have won 26 OCAA championship medals and made three national appearances.

Duane Shadd began his career at Conestoga as an Athletics Technician in 1978, and has served in a variety of roles in the Athletics department. In 1979, he was named as assistant coach of the men’s varsity soccer team. Expanding his career at Conestoga in 1995, Shadd became a professor of Liberal Arts at the college, while maintaining assistant coaching responsibilities for men’s varsity soccer.

“Duane always focused on the positive, and above all, gave me a chance on the field,” said former player Lucca Mazzucco, “I will never forget that.”

“It was never all about athletics for Geoff and Duane,” said athletics coordinator Marlene Ford. “They were most interested in watching the students grow and become successful at whatever they chose to do.”

Throughout more than 30 years of coaching and teaching, Johnstone and Shadd have served as mentors, role models and friends to Conestoga students. Many of their former athletes and students have gone on to become influential leaders in their careers and their communities.

Both men retired from coaching in 2009, but remain influential in the development and maintenance of Conestoga’s rich athletic tradition.