Unemployed young people with few marketable skills continue to struggle to find jobs in the wake of the recession, Guelph MPP Liz Sandals said Monday, as she announced funding that will help a select few from that group learn to operate heavy equipment.

Sandals joined Conestoga College president John Tibbits at the post-secondary institution’s Speedvale Avenue West location in Guelph to announce $230,000 in funding from the government’s Open Ontario Plan. The money will help deliver pre-apprenticeship training in the heavy equipment operator program, and will give about 20 unemployed youth free training in tractor/loader/backhoe operation.

“I think we have recognized for a long time that where we have traditionally been a bit weak in Ontario is in preparing students to go into the skilled trades,” Sandals said.

Many people who lost their jobs during the recession, she said, don’t have a level of education that would give them the skills they need to find new jobs. At the same time, she added, local employers are having trouble finding people with the right skills for jobs that are available.

Pre-apprenticeship training gives a person the qualifications they need to get into a formal apprenticeship program with an employer, she added.

Heavy equipment skills are good ones to have in an Ontario construction environment that has remained relatively stable despite recent economic uncertainty, said Blaire Gateman, vice-president of Gateman Milloy Inc. His construction company has trouble finding qualified heavy equipment operators, he said in an interview. Conestoga graduates fill many of the available positions.

“Over the last few years I’ve hired seven students who are operators out of the Conestoga program,” he said, adding the demand for these operators is huge. “It is hard to find people. But if they have made a commitment to do an apprenticeship, you know they are eager to apply what they’ve learned.”

Tibbits said apprenticeship programs are among the fastest growing offerings of Conestoga, with more students interested in them than ever before.

“We really need to ensure that people are prepared so they can be successful,” he said, adding that apprenticeship is one the three main areas of post-secondary education along with college and university. “A focus on applied learning is so important.” Conestoga’s Waterloo branch received $260,000 to develop a pre-apprenticeship program in refrigeration and air-conditioning mechanic, plumber and gas technician trades.

Want more information about Pre-Apprenticeship programs at Conestoga? Come to one of our Information Sessions. 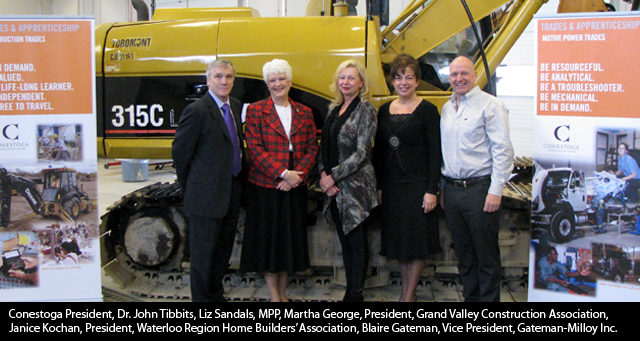