Learning from a Master

He’s travelled from Hong Kong to Singapore, to New York and Toronto, and now to Conestoga’s very own bloom. restaurant. On Wednesday, March 2, world-renowned Master Chef Susur Lee took some time out of his busy schedule to cook alongside Conestoga’s hospitality and culinary students when bloom hosted the Culinary & Hospitality Student Fundraising Dinner. The proceeds from the $200 per plate event will be used for student scholarships and awards: with 75 people in attendance, roughly $6,000 was raised to assist in student success and learning. 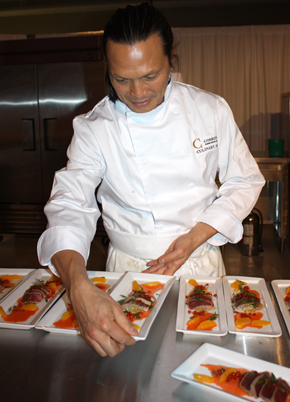 Lee brought a celebrity feel to the evening. Named one of the “Ten Chefs of the Millenium” by Food & Wine magazine, he has travelled the globe as a guest chef and consultant, making numerous television appearances and gaining even more popularity by defeating 20 competing chefs last year in the hit TV show, Top Chef Masters. Lee worked with the students to craft a menu with influences from around the world, reflecting the culture that he tries to create with his cuisine. “The students were great,” Lee said.

“They really wanted to learn, were anxious and had very good energy. Everybody wanted to give a helping hand and do their very best.”

The idea of bringing Lee to bloom came from Maitre d’ & Sommelier Matthew Worden and chef-instructor Paul Torrance, who decided to invite additional chefs to cook with the students after the success of the school’s Langdon Hall dinner with Grand Chef Jonathon Gushue last year. Worden worked with Lee for four years at his Toronto-based restaurant Susur. That personal connection is what brought Lee to the Waterloo campus.

The opportunity is something that Worden thinks was “massive” for the students. Lee arrived at 7am and gave roughly 70 culinary students, as well as four different groups of hospitality students, the opportunity to take part in the creation. Gary Hallam, Chair of Hospitality Programs, believes the night was a win-win for everyone involved, from the students, to the program, and even the industry. “There were so many hospitality people here today, including eight from the industry, who are now going to think so much more highly of our graduates once they get out into the industry,” he said. At the end of the night, Worden had nothing but praise for the students who helped make the night a success: “My barometer for a great night is when I don’t really have to do anything and I haven’t done much tonight. The students have been fantastic.”