Tune your TV to Rogers in the coming months and you’ll find some exciting new programming, brought to you by Conestoga College students. 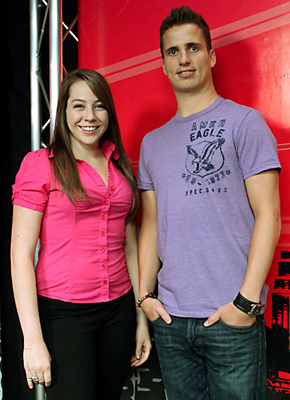 Two new 30-minute shows have been airing this winter, Inside Angle and Conestoga Connected, produced by two programs within the School of Media and Design: Videography - News Producer option and Broadcast Television.

Both shows aim to showcase the talent and technology of the college to the larger community, in Waterloo region and around southern Ontario.

Anything from firefighter training on a frozen late to horse racing to the transgendered world is explored on Inside Angle. The news magazine show will feature six episodes in its debut season, something Steve Parr, coordinator of the Videography-Broadcast Journalism/Documentary program, said is no easy feat.

The eight students on the show’s production team are enrolled in the post-graduate program and come from various backgrounds. Former university and college graduates along with current Laurier Branford students are all represented in the group. Laurier’s Journalism program, like Rogers, takes advantage of the broadcast technology that Conestoga has to offer.

Regardless of their backgrounds, Parr, who serves as the show’s executive producer, said it’s essential the group completely buy into what they’re doing since it can be difficult to incorporate this kind of venture into a college program. For one thing, students can be called in on days without class for filming.

The six students producing Conestoga Connected know a thing or two about working on off- hours. The second-year Broadcast Television students have taken on the workload originally shared by almost 20 people.

What started as an online news website three years ago has evolved into a five-segment hosted television program. With regular segments like “Morning, Noon, and Night” - which showcases activities in the region at different times of day - it’s obvious community links are a big part of the series.

Broadcast Television faculty member Rachelle Cooper hopes stories like this will interest a variety of viewers and entice potential students with the college’s abilities.

"We’re really hoping the community is seeing the quality of product" that Conestoga students are producing, Cooper said.

Story and pictures by Lindsay Johnston, a first-year student in Conestoga’s Journalism program.