Aubrey Oldham, a first-year student in Conestoga’s Pre-Service Firefighter program, made college history on February 6 when he captured a bronze medal at the Canadian Indoor Rowing Championships. Oldham posted a time of 6:18.00 in the 2000m race performed on the Concept 2 rowing machine, a standard fitness machine found in most gyms. 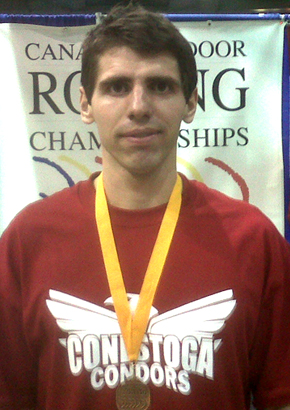 This year’s race was held at the Hershey Centre in Mississauga, Ontario and hosted over 900 competitors from various clubs and universities. Oldham, who competed in the senior men’s division, placed third behind Mike Harowicz of Don Rowing Club and Jake Martens of Brock University. Oldham was familiar with both competitors entering the race.

“I was happy with the race as I really had no idea what to expect this time around,” he continued. The 27- year-old former national team rower has posted a personal best time of 6:11.23 in the same 2000m race.

Oldham began his rowing career over ten years ago with his twin brother. He has competed on the international level, representing Canada at both the World Rowing Championships and the Commonwealth Games.

Rowing is not currently an official OCAA (Ontario Colleges Athletics Association) sport; however, with increasing interest in the sport, Aubrey Oldham hopes that one day it will be.

“I would love the opportunity to continue to compete as a Condor,” states Oldham.

Conestoga offers a variety of varsity, extramural, intramural and recreational athletics for students to participate in both competitively or non-competitively.