The new campus nearing completion on the southeast side of Highway 401 is one of many big achievements in John Tibbits’ 23-year career as president of Conestoga College.

The campus on Fountain Street, which will house 3,000 engineering, information technology and food processing students when it opens in September, also gives Conestoga a high-profile presence in the City of Cambridge. 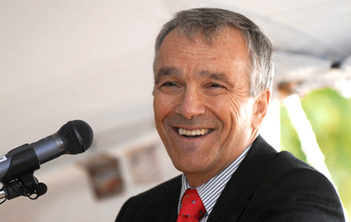 Tibbits’ leadership in expanding the college and increasing its contribution to the area’s economic prosperity was recognized Thursday night when he received a lifetime achievement award from the Cambridge Chamber of Commerce.

The award was one of 11 the chamber handed out during at its annual Business Excellence Awards dinner.

Under Tibbits’ leadership, Conestoga has blossomed into one of the most prestigious organizations in its field, chamber president Greg Durocher said in presenting the award.

“Under his guidance and vision, this higher learning institution has touched the success of our business community more than any other, and has become known by most businesses as the place to learn and grow,” Durocher said.