First it was the men's extramural hockey team that won a tournament and now the Conestoga women have come home with a championship!

The Condors went to the Lambton event in Sarnia and rolled through the tournament undefeated. They downed the host team 4-0, St. Lawrence 4-0, Humber 4-1, and Georgian 2-1. Each team played each other once with the club with the most points at the end of the day, declared champion. 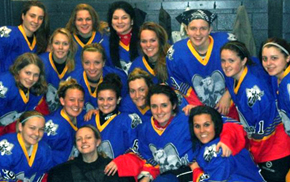 Goaltender Jenna Sosnoski was stingy in goal and was a key to victory. Player of the game awards went to Carmen Carnochan, Jenna Sosnoski, Kori Lee Martin.

"It was a complete team effort" said Katie McCartney, who oversees all intramural and extramural activities at Conestoga. "Each line chipped in with goals and the team defence was excellent allowing only two goals in four games."

The women would love support at their next tournament Friday February 11th as Conestoga plays the host. The Condors will be playing games at 8 am & noon on their way to the semi-finals.